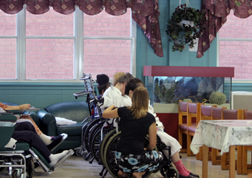 According to The New York Times (7/23/12), one lawsuit alleges a man who lived in a residential treatment center for people with developmental disabilities was starved and beaten with sticks. The victim, known in the lawsuit as K.C., reportedly died of bacterial pneumonia in 2011, at age 22, while still living in the home. The lawsuit, as reported by the Times Union (7/24/12), alleges K.C. suffered torture at the hands of caretakers in his home. Among the alleged torture was confinement on a mat, socks shoved in his mouth and starvation.

The lawsuit further alleges that when K.C. died he was severely malnourished and had cuts and bruises on his body. Five staff members were named as defendants in the lawsuit.

Meanwhile, another lawsuit alleges a different man was not given a proper diet and lost approximately 50 pounds. Both lawsuits claim the families of the victims filed complaints about how their loved ones were treated, but the abuse continued. The lawsuits seek unspecified damages.

More CARE CENTER ABUSE News
Residential care homes and nursing homes have a responsibility to provide safe, proper living conditions for their residents. This means providing homes that are free from abuse or neglect and that offer residents the care and nutrition they need. It also means ensuring employees treat residents with the utmost care and respect. Failure to do so can result in devastating and traumatic injury to vulnerable residents.

Nursing homes also have a responsibility to report suspected abuse. One nursing home faces allegations it did not properly report suspected abuse by an employee. The employee now faces charges of assaulting patients, including groping one patient, while an administrator faces charges of failing to report the incident to police officers. According to NBC29 (8/10/12), the police did not find out about the assault until a family member came forward with the allegations.