Descriptions of abuse at seniors care facilities continue to percolate through the media. Little wonder, given an aging US population that is about to become an even greater issue as baby boomers move through their retirement years, together with profiteers vying to capitalize on the provision of services to seniors at the lowest possible cost. To that end, abuse often stems from neglect, cost cutting and understaffing. However, nursing home abuse is not the only kind of care center abuse. 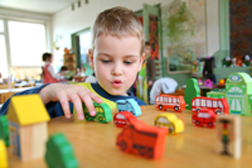 An example of that is unfolding in Pennsylvania, where the state is alleging abuse at a York YMCA child care center.

According to the York Daily Record (10/10/13), the Pennsylvania Department of Public Welfare (DPW) alleges “gross incompetence and negligence in the operation of a child care program,” or so states a letter bearing the signature of Barbara G. Minzenberg, the Deputy Secretary of the DPW.

Amongst the allegations of care center abuse at the facility are reports that a child had been left unattended in a room for a period of time not less than 10 minutes on March 22 of this year following the failure of a facility staff member to conduct a head count prior to leaving the facility for an activity.

Upon further investigation, the Department found evidence that a child had been forcefully yanked by the arm as a form of discipline. That was in June. A month later, a state representative conducting an investigation witnessed a staff member of the facility undertake care center abuse by way of physical discipline to a child. The investigator noted the staff member was “overheard screaming at the child to ‘shut up,’” according to the report.

Yet another child, the investigation found, was the brunt of physical discipline to the point of requiring medical attention as the result of a Care Center Physical Abuse situation.

It is not known if a care center abuse lawsuit has grown from the reports. However, there remains some wrangling over the facility’s license to operate. At the first complaint this past spring, the state placed the York YMCA under a provisional license while the state conducted its investigation. When further reports and evidence of care center abuse was uncovered by the state following the issuance of the provisional license, that license was revoked. However, the revocation is currently under appeal. “The YMCA of York has submitted a plan of correction with an appeal; at this point, we are still reviewing that plan of correction,” said department spokeswoman Carey Miller, in comments published in the York Daily Record. “[The York YMCA is] able to operate during the appeals process.”

According to the care home negligence report, the facility is licensed for 165 children from an age as young as 1 year, through school age. As of January, there were 86 children actively in care while their parents worked.

One parent, whose daughter was cared for at the York YMCA while the child’s mother worked, said in comments to the York Daily Record that “you should always keep your eyes on every child.

“I was shocked,” continued Ashley West, 25. “At the end of the day, it’s still neglect.” It is not known if West or other parents whose children’s care may have been compromised at the facility have been in contact with a care center abuse lawyer.

Click to learn more about LawyersandSettlements.com
LawyersandSettlements.com - A trusted, independent legal news provider bringing quality news and information on all legal cases and lawsuits filed in United States of America to its readers since 2002. Over 250,000 legal help requests including Personal Injury Cases, and Elder Care Cases have been forwarded to lawyers all across to the country.