Katie had a CardioGen-82 PET Scan in March 2011 for a heart issue—results came back negative. But in July her doctor called: they wanted to talk about the PET Scan. More specifically, possible CardioGen-82 radiation exposure. 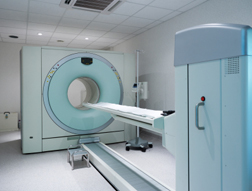 “I knew there was something funny going on so I called my son—he is an attorney,” says Katie (not her real name). He did some research and found out that a few people had been detained coming through customs and radiation levels were traced back to the CardioGen-82. My doctor told me pretty much the same thing. He said the FDA doesn’t think there is a problem but he needed to inform me in case I read something about it and worried needlessly.”

Two weeks later Katie got a second call from her doctor’s office. They were going to run scans and would she care to participate in this study, no charge. She agreed and set up an appointment. “I thought I would go back to the Nevada Heart and Vascular Clinic, where I had the PET Scan,” Katie says. “Instead it was the Nevada Public Health Radiation Control. That raised my safety radar.

“I thought a technician would be there. Instead there were three public health people and the doctor in charge of the PET Scan. The first thing they had me do was walk through an upright contraption like those at the airport. Then I sat down at a table and they placed a device—it looked like a radar gun—against my chest. I sat there for ten minutes while they did a scan. I asked if it was being done in Nevada because nuclear testing used to be done here.

"No, they were simply being proactive instead of reactive. Then I asked if there was any chance if I could have been exposed over the years because my husband is in the military. Negative: they said this test is so specific that, if you ate a banana, it would detect levels of potassium.

"In October I received the letter from the Public Health Department. The first page is a form letter, stating that I may have been exposed to radiation from the CardioGen-82. It goes on to say, ‘Potential Issues with CardioGen-82 Generator: The FDA believes the risk of harm from this exposure is minimal…it would take more radiation to harm you…Additional screening opportunities will be made available if you and your physician believe it may be of benefit to you. This will include full body screening at a national laboratory out of state paid for by the manufacturer, Bracco’.

"The second page lists my results. My son looked at this and said, ‘We are going to find you an attorney.’ I still wasn’t overly concerned but I got the forms from Bracco, agreeing to participate in further tests in the California lab. I signed the forms in November.

"In December I received a call from a travel agency to book me for the tests. They had four dates available in December, none of which worked for me. I asked her if I could be tested in January and she said they would be testing until October 2012. I asked her to call me back in January.

"No call from her so I phoned Nevada Heart and Vascular on several occasions, up until March of this year. A technician finally spoke with me and said a doctor at the clinic did not have any response from Bracco concerning the testing. So now I’m in limbo.

"I spoke with my son again and he spoke with attorney Brenda Fulmer at Searcy Denney Scarola Barnhart & Shipley: they are handling the CardioGen-82 issue. They are suing Bracco on behalf of a number of plaintiffs.

"I read in the news that the FDA gave Bracco permission to put their product back on the market and that the CardioGen-82 issue is the physician’s errors. But my son believes that Bracco wouldn’t respond because they were attempting to point the finger at the doctors’ offices and he also thought they don’t want to continue the testing in California. Bottom line: he thinks Bracco is responsible. Meanwhile my attorney thinks that Bracco doesn’t care about testing after it got the FDA’s nod of approval.

More CARDIOGEN-82 News
"My complaint with Bracco is that I agreed to participate in their study in the event that there might be radiation and that it could be discovered early so I could be proactive in my own healthcare. Because Bracco has refused further testing and stopped the study, they are hoping I will just go away.

"But my son explained to me that I was 57 when I was exposed and a lot of people were much older. If it takes 15 years for a problem to occur, most of those people won’t be around, but someone my age will likely still be on the planet. So I am back to dealing with my own health plan with my doctor and cardiologist, hoping there is no problem down to the road. I am making sure that everyone knows I had this exposure, including the attorneys.

"Interestingly, the majority of my doctors haven’t heard anything about the Bracco CardioGen-82 recall. Only those doctors who administer the test received a “Dear Doctor” letter.”

Posted by
Anon
on November 19, 2012
This was a case of the Technologists trying to "squeeze" the most product out of the genrator, that little box that the Cardiogen comes from. Bracco clearly states the proper usage of the prodeuct. This really was the fault of the facilities. It only happened at a few places out west. The whole testing was voluntary and all results came back clean.