More car crash News
Three young men were killed and two others injured in a fatal car crash about forty miles southeast of Cleveland on Wednesday. Joshua Sherbourne, 21, of Southington, Zachery Nolen, 19, of Newton Falls, and Michael T. Theodore Jr, 19, of Warren, were hit by a truck en route to Cleveland, where the men were to take the oath of enlistment in the Marines. 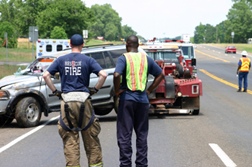 Twenty-five-year-old Marine Sgt. Charles Keene, who was driving the car, and Karl McDermont III, of Masury, a fourth enlistee, have both been hospitalized with injuries and are reported in stable condition.

According to investigators at the scene, the accident caused a seven car pile-up. It appears to have been caused by the truck, which rammed into the back of the car pushing the car through an intersection and into traffic where it was hit by several other vehicles.

Jim Migliozzi, who was returning home from a day's fishing trip, was also a victim in the crash. "I saw cars scatter and I scooted through and the truck hit me again," he told the Associated Press. "It took out the whole back end of my truck."

Grief counselors are attending to students at Newton Falls High School, where one of the enlistees graduated last year.