The horrifying photographs of a Nevada bus crash two days ago showed almost nothing left of the bus carrying workers to a resort in Primm, Nevada. Thirty people riding their work shuttle bus careened off Interstate 15, heading south, about 30 miles from Las Vegas. The bus crash happened just before 2:30 in the afternoon as workers were preparing to start their night shifts.

Nevada Highway Patrol reported that the bus drifted into a concrete guard rail, sliding along several hundred feet. At the end of the guard rail, the bus flipped onto its side, tearing the gas line. Sparks then ignited, engulfing the bus in flames as it rolled down an embankment at the edge of the highway. All passengers were trapped.

Passers-by became good Samaritans, stopping to free the driver and help many of the passengers to escape. Amazingly, no one was killed in the bus crash that sent everyone to area hospitals. Highway Patrol suggests driver error or mechanical failure might be responsible for the crash. 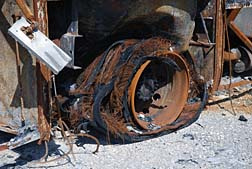 Photographs show a scary scene, with only a burnt-out shell remaining of the bus. Scrape marks were visible along the concrete barrier. At the time, traffic was backed up for miles as the south lanes were closed. A reporter at the scene described it as one of the largest investigation scenes he had ever witnessed, with more than 600 feet taped off by Highway Patrol for its accident investigation. Highway Patrol also interviewed witnesses and passers-by.

If you or a loved one has suffered from a car accident, please contact a lawyer involved in a possible [Car Accidents Lawsuit] to review your case at no cost or obligation.
Request Legal Help Now