A Jefferson Circuit Court Jury awarded the Estate of Bernard Mulligan $3.25 million dollars for injuries suffered in a car fire resulting in Mr. Mulligan's death. The jury deliberated for three hours at the conclusion of a four-day trial presided over by Circuit Court Judge Martin McDonald. The jury determined that Don's Auto Clinic, which was an auto repair shop located on Greenwood Road in Louisville Kentucky, and its owner, Samuel Barrett were negligent in diagnosing, repairing, and inspecting Mr. Mulligan's vehicle. 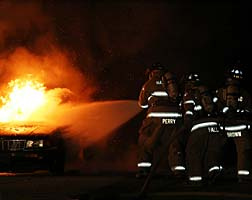 The evidence showed that Mr. Mulligan's vehicle was towed to Don's Auto Clinic on two separate occasions due to overheating. The second time, Don's Auto Clinic was told that wire insulation had melted. Don's Auto Clinic recommended that the engine be replaced and a rebuilt engine was installed in the vehicle. Two days after Mr. Mulligan picked up his vehicle, he parked it and let the car idle for about 30 minutes. While the car was idling, a fire erupted in the engine compartment, engulfing Mr. Mulligan in flames. It was unclear why Mr. Mulligan could not get out of the vehicle. There was testimony that he did suffer from diabetes and that he may have been incapacitated from the effects of diabetes, carbon monoxide or other reasons. He suffered burns to over 45 % of his body including his head, face, neck, chest, hands, legs, and even his airway. En route to the hospital, Mr. Mulligan remained conscious and responded to commands; however, he suffered excruciating pain and paramedics could not administer pain medication. He survived three days in the burn unit at University Hospital before he died.

The jury awarded the following damages:

Mr. Mulligan was a 67-year-old butcher who worked at the Pic Pac in Louisville's Portland neighborhood. He was survived by 5 adult children and was represented at trial by H. Philip Grossman and Jennifer A. Moore of the Louisville law firm of Grossman & Moore PLLC. Grossman and Moore described this as a tragedy of enormous proportions, compounded for the family by the failure of the insurance company to settle this case within the policy limits before trial.

If you or a loved one have suffered losses in a similar case, please click the link below and your complaint will be sent to a automotive lawyer who may evaluate your claim at no cost or obligation.
Request Legal Help Now