An online car referral company is alleged to have received illegal kickbacks from new and used car dealerships in exchange for referring customers to those automobile dealerships. These kickbacks would amount to several hundred dollars per vehicle if the customer purchased the car. Regulators in several states sent letters to car dealers stating that legal problems exist with this business model, and car dealer associations in other states, including California, say the practice may violate their state law. 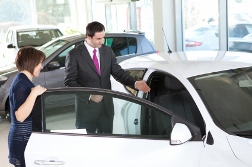 The car referral company alleged to have been receiving these illegal kickbacks allegedly attracted potential customers by offering them a certificate guaranteeing a price from a particular dealer for the new or used car which the consumer wanted.

One method the referral company used, in the case of consumers searching for a car over the internet, would be to provide the information from its own website to go to a particular dealer for the car which the consumer wanted at a supposed guaranteed price from that dealer. The company would issue a certificate guaranteeing that price for the car with that dealer. Some consumers have complained the car would then not be available at the dealer for that price, or the dealer would try a bait-and-switch to a differently priced car. If the customer did buy a car, the dealer would then pay a kickback to the internet company for the referral. Such referrals are sometimes called “bird-dogging,” which is not permitted in California without appropriate licenses and disclosures.

The other manner in which the referring company allegedly operated was through the use of well-known corporations and well-established organizations with which it arranged a relationship to be that organization’s “car buying service.” Employees of the corporation or members of the organization would use the “car buying service” through their employer or membership organization, and be sent to a car dealership which supposedly had committed to selling the desired car at a “guaranteed” price. Consumers have complained, though, that dealers would not have the promised car or the guaranteed price. And if the car dealer did make a sale to the consumer, the car dealer paid a kickback to the referring company.

Consumers do not need to know that a kickback or inducement was given for the law to have been broken. By being referred to a specific dealership in exchange for contingent compensation, the consumer may have overpaid by having a kickback included in the transaction, or missed out on a better price or deal at a different dealership, believing he would get the best deal at the dealership he was referred to.

If you purchased a car in California through a third-party referrer or through an organization’s car buying service that offered a "guaranteed price" at a particular car dealer, you may have been a victim of an illegal inducement, in violation of California law. If the car was purchased between January 1, 2008 and January 31, 2012, you may be eligible to file or join a lawsuit against the third-party referrer.

You do not have to know that the kickback or inducement was given to be eligible to join or file a lawsuit. But if you purchased your car through a dealer that you were referred to by a direct car buying referral company or through your employer’s or organization’s car buying service, a kickback may have been involved in your purchase.

If you or a loved one have suffered losses in this case, please click the link below and your complaint will be sent to a business frauds lawyer who may evaluate your Car Dealer Kickback claim at no cost or obligation.
Request Legal Help Now

Posted by
Dan
on February 13, 2013
Lynn, a Greg over 30 years in the automotive Industry I can answer your statement directly..first as a dealer I am required to pay huge sums just to be considered for inclusion of service, then each sale has a sizable fee, and ;I must also pay a monthly fee to remain on list, dealer honesty is not a consideration, so when you buy from a service I ha be to ch large you more to cover expenses of sale, of course you will never know that because servicemen quotes price given to them by dealer, etc.etc.
Posted by
James H
on January 21, 2013
Lynn P:
I do see a problem with bird dogging. These companies are enticing consumers to go to particular dealers for their personal profit not as a help for consumers. I would not want to waste my time traveling to a dealer, only to find out there was no car at the the price guaranteed. I would be upset to have wasted my time and gas chasing a deal that did not exist. If this company is sued out of existence, oh well.
Posted by
Ken
on January 20, 2013
Bird dogging is a minor concern compared to the obscene use of so called Doc fees
Posted by
Lynn P
on January 20, 2013
Frankly, I do not see any difference in buying a car through a referral service or buying insurance through referral from companies that are going to get you the lowest quote, etc. It is done all the time. The buyer is saying that rather than spend their time calling around, looking through the paper and online to find their car, a referral agency can do it for them. If the buyer doesn't like the price or the car, they don't have to buy it. Referral companies have a function, and can locate cars and other products often faster than the consumer can, because they may have connections the consumer does not. Referral agencies or companies are plentiful in every area, and if they guarantee a price and the car is not there, oh well. Most of the time it probably is. I do not see why "bird dogging" for the consumer is against the law. If consumers do not trust referral agencies, they don't have to use them. We are a sue-happy country, and we need to get over ourselves.

Click to learn more about LawyersandSettlements.com
LawyersandSettlements.com - A trusted, independent legal news provider bringing quality news and information on legal cases and lawsuits filed in the United States of America to its readers since 2002. Over 650,000 legal help requests including Business Frauds, and Consumer Frauds have been forwarded to lawyers all across to the country.