More CAR CRASHWORTHINESS News
Ford Motor Company is rolling out a new style of police cruiser that it claims is faster, has better handling and exceeds the car crashworthiness of the Crown Victoria, which is going out of production late next year. 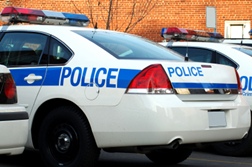 The new Interceptor is a front- or all-wheel-drive sedan based on the updated Ford Taurus and designed under the supervision of the automaker's Police Advisory Board, a group of current and former law enforcement professionals who provided input on safety, performance, durability, driver comfort and functionality.

"Police nationwide asked for a new kind of weapon in the battle for public safety, and Ford is answering the call with a purpose-built vehicle – engineered and built in America – that's as dynamic as it is durable," said Mark Fields, Ford's president of the Americas, in an official release.

Central to the redesign is officer safety, as a 2009 report from the National Law Enforcement Officers Memorial Fund found that the number of police officers killed in traffic related incidents jumped 17 percent during the first six months of the year. The automaker promises that the new police cruiser has been engineered for the "highest level of crash worthiness and occupant protection," according to SpeedTV.com.

If you or a loved one have suffered losses in this case, please click the link below and your complaint will be sent to an automotive accidents lawyer who may evaluate your Car Crashworthiness claim at no cost or obligation.
Request Legal Help Now