"I want to say to everyone passing me on the highway that you will be dead if your car crashed driving that fast," says racing car driver Brian Watson. "Auto makers aren't doing enough to increase the survivability of high speed accidents." Increasingly, vehicles are designed for fuel efficiency and that means lighter cars. And that spells car crashworthiness failure.

"I drive extremely defensively on the highway because the car I am driving doesn't have the right protection," says Watson. "When I am in a race car, there is a lot more protection and in an accident, chances are I will walk away without injury. Very few race car drivers are killed because the sport is so safety-conscious and lots of research and development goes into safety--unlike precautions for the general public."

According to Watson, people are killed in auto accidents for two main reasons: they drive too fast and construction of the vehicle is not adequate to survive an accident at high speeds. "In today's world, we have better materials to build cars and more should be done to drastically reduce fatalities," he says. 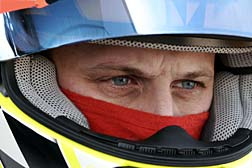 "For instance, a race car hits a guard rail at 75 mph; a lot of damage is done to the car but the driver walks away unscathed, is able to make repairs and drive the car later that day," Watson explains. "Any car should be able to take a crash."

Watson suggests that the cabin section needs to be reinforced so driver survivability could be close to 100 percent. Side impact airbags can help, but if three-quarters of a car is demolished, side bags aren't going to matter. And the auto makers are being forced by the government to make vehicles more energy efficient by decreasing weight but they are not adding safety features.

Watson looks at vehicles after they have been in serious crashes and believes they are destroyed unnecessarily. One reason is that car makers are not testing enough in real-life situations: most crash test dummies are driving 35mph, not 85 mph. "Tests should be carried out in the real world at higher speeds," says Watson, "and tests should involve other cars and stationary objects such as poles."

Why aren't manufacturers carrying out more extensive testing? Watson says they likely consider an accident to be the fault of the driver and figure that a certain number of accidents per year will be unavoidable, no matter how safe they make their vehicles.

"In my opinion, many fatalities can be avoided if the car design was specifically to address the more drastic accident," says Watson. "The cons outweigh the pros: if cars weigh more, they are able to take these hits better. But it would cost more to make the vehicle and it would take more fuel per gallon to power the vehicle. And just because drivers are in a newer vehicle, it doesn't mean they are safer."

Some manufactures are testing their autos at 35 mph to make sure they pass or even exceed requirements—one major agency puts out these findings. Why? When an accident occurs on the highway, it usually involves two vehicles and there would only be a difference of 35 mph if they are both traveling in the same direction. But if your car malfunctions, you could be going a lot faster.

More News
"As well, a head-on collision occurs at a higher rate of speed, which demonstrates you are never really safe at higher speeds. For most cars in a bad crash, the roof is off, the car is cut in half or it is quarter the size," adds Watson. They are definitely not built as strong as they used to be. The makers are engineering their cars with a better 'crumple-zone' that absorbs the energy of an accident. The front end is designed to crumple and absorb the impact, making lighter and more efficient. All this is a good thing but Watson thinks they have gone too far and now they more readily rip apart. It's a fine line.

"People drive like maniacs around here; I can only imagine what these cars look like when they flip over," says Watson, "and in some places, 75mph is posted. Our governor of Pennsylvania, Edward Rendell, has gone on record saying he is unable to drive at the posted speed of 65 mph due to the flow of traffic! Even in the slow lane, he is forced to go above the speed limit because other cars are driving so fast."

We all know to slow down for safety sake, but perhaps manufacturers should be more mindful of human nature and design their vehicles accordingly.