Don Hunt doubts he will ever buy another Ford after the airbags failed to deploy in a head-on collision. So much for car crashworthiness. "I picked up my son from work and we were driving home, doing about 35mph," says Hunt. "We had our seatbelts on—fortunately. As we approached a mall entrance a line-up of cars was waiting to turn in. A woman tried to get jump the line-up (guess she couldn't wait to go shopping) and hit us head-on; she was driving at least 40 mph. 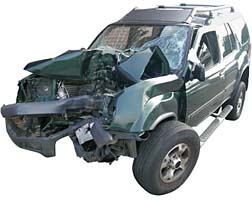 My Ranger Edge, that only had 6,000 miles on it, was totaled. Even though she hit us head on, the airbags failed to deploy. Miraculously, we were only bruised from the seatbelts; I guess it was because we both Saw her coming and braced ourselves. My son and I both got stiff necks and muscle discomfort and my knees were bruised where I hit the dash.

More News
We had the truck towed to the dealership and I complained about the airbags. I never did get a straight answer - it was sometimes this, sometimes that. I understand that they can find out why the airbags failed but it is costly for the dealership. My auto insurance company told me that they can be checked; they bring in a technician to find out. I asked Ford if that indeed can happen; someone at Ford said they ' could look into it', but because we were not injured and the truck was totaled, they weren't going to bother.

My wife also contacted Ford's customer service. She told them exactly what I am telling you. Ford said they would look into it, check into their records and someone would open a case file and get back to us. That was about one year ago and we never heard another word from Ford.

How many other people are driving a 2006 Ranger Edge?

What about the cost of our lives and others?

We had been long-time Ford customers--my wife had a Mustang at the time. We don't have either one anymore and I don't know if I will ever buy another Ford.