Carol Genzano's son was involved in an altercation with her car and a telephone pole. Amazingly, her son wasn't seriously injured but Carol's car was a write off; the front end was totaled and the frame was bent. Even with this amount of damage, the airbag didn't deploy.

"I contacted Hyundai because I thought they should know that the airbags on a car that wasn't even a year old didn't deploy," says Carol. "I wanted them to know this happened, not just for my satisfaction, but for others." 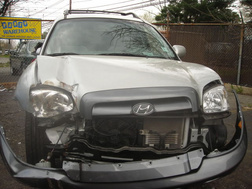 Not surprisingly, Hyundai wasn't concerned. Instead they asked Carol what she 'wanted.'

"I wasn't asking them for anything but come to think of it, they could give me the money I lost--$5,000 down payment for the 2006 Santa Fe," she says. "Ironically, I purchased this model because they are ranked one of the safest cars." (Carol's insurance covered the rest of the cost as she had full collision insurance.)

"When I told Hyundai the airbag didn't deploy, they didn't even ask if anyone was hurt. They sent me a form to fill out and inspected the car. They said the airbags don't deploy unless a head-on collision occurs," says Genzano. "My son hit a telephone pole just a little of center, completely destroyed the front end and totaled my car and that wasn't enough of an impact? What is the point of having airbags?

"Neither did the seat belt activate. The seatbelts tighten if you have an impact to hold your back so you don't go forward. The impact caused the glove compartment to pop open and the windshield cracked on the driver's side.

More News
A letter from Hyundai states that 'the airbag system operated according to its design in connection with your son's accident...the vehicle experienced an angular impact involving significant lateral forces...the frontal component to the collision simply was not sufficient to merit airbag deployment.'

When I saw my car later at the body shop, the manager said, 'Take a look at this car, the airbags didn't deploy on this one either.' It was totaled from a head-on collision-- the front end was also smashed in and it looked like someone must have been seriously hurt.'"

These accidents raise the question: how much of an impact is necessary for airbags to deploy and how much lee-way is there from the central point to deploy? Does the consumer have to wait until a number of fatalities occur and the vehicle is recalled?

Posted by
Rich Van vugt
on August 5, 2015
Same! We have a 2006 Hyundai Santa Fe. Love the car, but last Wednesday I hit a Ford F-150 directly in the side at 45mph, big crash. My car to totaled. No airbag deployed. The f150- side hit by me, all air bags in the truck deployed. We bought the vehicle brand new because of the safety rating. Thank god the babies weren't in the car