William Foster's son survived a collision but his passenger did not. Neither of their airbags deployed--yet another tragic example of auto defects and lack of car crashworthiness.

"In November, 2004 my son, William Jr., was driving my 2004 Ford pick-up to work--he had a contract to haul mail for the post office and my vehicle was part of the contract," says Foster. "A girl in a little Pontiac pulled out from a secondary road, right in front of him, and he struck her on the passenger side." 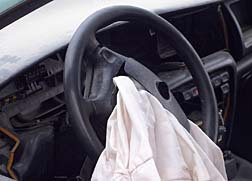 'The pickup had airbags but they didn't deploy. William Jr. struck his head on the grab handle which caused him a massive contusion on his forehead—he was unconscious for some time. A friend of mine, my son's passenger, was killed. The driver of the other car had minor injuries but her passenger was seriously hurt.

William Jr. was able to call me on his mobile phone but by the time I got to the accident scene they had been transported to the hospital. I looked inside the truck and with that impact, the bags should have deployed.

When I got to the hospital, my friend had passed away. My son had a grapefruit-sized lump on his forehead—miraculously, the only serious injury he suffered. However, three years on, he is still going to the doctor for migraines and some psychological problems regarding the death. It is very stressful. He was 23 when this accident occurred and hasn't been the same since.

He's jumping jobs a lot and I think the accident has a lot to do with it. He's not living with me right now so I don't know how he is functioning on a daily basis. I do know that it cost him his job. He lost his job at the post office because he couldn't fulfill his contract—they wanted him to return to work the next week but he couldn't get into the truck and drive—medically he couldn't do it and the truck was totaled: he was using my truck on the job.

When he was recovering I was supporting him financially for about five months.

More News
My insurance paid for medical bills but Ford should pay for everything, not just the truck but all the problems my son has gone through. I e-mailed Ford and told them about the airbag not deploying but never got a response. I saw a lawyer before I visited your site and he told me that Ford was a corporation and they preferred not to take the case.

I am still searching for justice. These cases happen a lot; I checked Ford for recalls on airbags and didn't find anything but I am sure there are other people out there driving a Ford pickup with defective airbags.

Currently, William jr. is working, trying to hold down this job he started six months ago. I don't know how long it will last. Before the accident he was in the military—he was sent to Iraq for eight months—and he was fine. This accident has caused him more grief. If the airbag worked, a fatality may have been avoided.

Posted by
Joy Reeve
on March 30, 2011
I too am a victim of Ford's non-deploying air bags.Right hand was left partly immobile due to hand being caught in steering wheel.I was belted or otherwise might have died.
I too have psychological problems due to accident.I wish some one would file class actrion against FORD for all these injuries. I have read multiple stories of serious injuries and someone needs to do this.Thank you!