Brennan Ringler purchased a Hyundai Tiburon in 2003 and he hadn't even received the registration sticker before he got into a driver-side collision. The man who caused the accident hit Ringler's car at 65 mph. "The side airbag didn't deploy, even though the impact pushed the driver's door handle onto my inner thigh," says Ringler. So much for the Tiburon's crashworthiness.

'According to the police report, the other driver was going that fast," says Ringler. "My door was pushed in so far that the door handle door was over the top of my crotch." 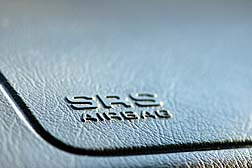 Miraculously, Ringler walked away with minor injuries but the car was totaled -or so he thought. The car was towed to the Hyundai dealership where Ringler purchased it and the other driver's insurance adjustor, without even looking at the car, signed away the rights to fix it. "She told the dealership to do whatever it takes to fix the vehicle--to get it repaired at any cost," says Ringler. "I can only assume that she was a freelance adjustor and was just getting paid to do a job. The repairs equaled about ¾ of what the car cost me in the first place. And they never fixed it properly; it has a bent frame and is constantly out of alignment.

"Back to the airbags: when I asked the manager of the repair department why the airbag didn't deploy, he told me that 'there is no guarantee and in order to guarantee that they deploy, we would have to test them which negates the purpose of them being installed in the first place - because once deployed, they are useless.' That was his response, verbatim!

'How are we supposed to check if they work once we deploy them?' he said! In other words, it's basically a crap shoot if they work.

I got into an argument with the dealership manager about replacing the airbags and a lot of other parts on the car. If they didn't deploy in the first place, they are obviously defective. The manager stated that due to the impact, the metal sensor never touched the piece needed to trigger the airbag; two pieces are needed to touch.

'How is that physically possible when the outer part of the door was touching my inner thigh?' I asked him, incredulously.

He didn't have an answer.

I called Hyundai of America and filed a formal complaint against the dealership for the entire debacle—not just for the airbags but because the entire car should have been totaled. I never heard a word back.

Now I'm driving a death trap. I am furious - I spent all this money on the Tiburon, will never be able to resell it and I am afraid to drive it. Before I bought the car, I did a lot of research and it was supposed to be one of the safest vehicles at that time. The main reason I purchased the Tiburon was because the sales person told me about the side impact airbags so I thought it would be an extremely safe purchase.

More News
I purchased the car almost four years ago yet I have only put 12,000 miles on it. Most people put that many miles on per year. I bought a secondary vehicle that is much safer and cheaper.

The amount of money dumped into fixing this total loss is unfathomable. I purposely held on to each scrap of paper showing itemized bills, the works. The vehicle cost $16,000 and they put over $12,000 in repairs. It started with one lazy person (the adjustor) and ended up with a bunch of greedy ones (repair people at the Hyundai certified dealership)

I will never do business with them again and will never buy another Hyundai again. Neither will my friends. So much for safety. Did this car ever get tested for car crashworthiness? I hope everyone who owns a Tiburon knows about the defective air bags."