The following is an account of three separate auto accidents that involved one family: two because airbags failed to deploy and another—killing father and son—due to defective seatbelts: all three examples of car crashworthiness failure.

"In the summer of 2001 I hit somebody broadside—the accident wasn't my fault," says Linda R. "I was driving 40 mph and the airbags in my 1996 Infiniti failed to deploy. I hit my head on the steering wheel and when I got out of the car I was literally seeing stars. Somebody drove me to the hospital (my car remained at the scene of the accident). 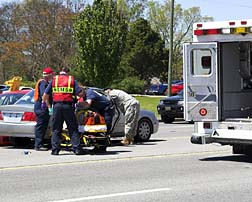 "I had a slight concussion and whiplash. About one year later I had two discs replaced in my neck—I waited this long because I was afraid. Then I started to get a weakness in my neck and therapy didn't do a thing. After the surgery I didn't have the pain but I wasn't out of the woods: my doctor explained to me that, because the discs are fused, you have to worry about injury later on to the discs above and below the fusion. The repercussions of this accident are never-ending.

If the airbag had deployed I doubt that my neck would have been injured. After the collision I sued the driver and I mentioned the airbag to my lawyer but he was more worried about the injury than the car."

About one year later, Linda's daughter was hit in the rear end and the airbag didn't deploy. She was driving her mother's car on the parkway and almost came to a halt due to heavy traffic. A pick-up truck behind failed to stop in time and hit her—he was doing about 55mph. "She hurt her back and had to go to physical therapy for several months; even today she is afraid that someone is going to hit her," says Linda.

"In June of 1993, my husband was driving his 1990 Pathfinder. He was working that night, delivering a package from New York to Bridgewater, New Jersey, and fell asleep at the wheel. My son was the passenger and he was sleeping (that is what I was told anyway). The car overturned and they were both ejected from the vehicle.


That night I got a call around 11pm. I knew they were dead. I didn't want to look at anything, not even their injuries. That very morning, when I drove my son to school, I remember telling him to wear a seatbelt all the time, even going around the block.

My daughter looked at the car—it had landed on my son's chest and my husband was nearly decapitated.

More News
My husband was a retired police officer and I can't believe that they didn't have their seatbelts on. The police report said the seatbelts were new—they didn't have any markings on them. But the vehicle was only a few years old. My husband always wore a seatbelt—they both did and I know that for a fact.

It still hurts. My son was only 15 when he was killed and I think about what he would be doing today, probably married with children of his own..."

In 1995, 8.8 million vehicles were recalled due to defective front seat belts made by Takata Corporation.
Some airbags are designed to deploy only upon center-front impact—another car crashworthiness failure.