A few weeks ago, Robert Russo's daughter got into a car crash in her 2004 Toyota Forerunner. "We thought she would be safe in an SUV but this wasn't the case," he says. Even though the car folded "like an accordion", the airbags failed to deploy--another case of car crashworthiness failure.

"My daughter rear-ended someone," says Russo (not his real name). "Amazingly, she is alright but her chest hit the steering wheel, which knocked the wind out of her and bruised her ribs. Had the airbags deployed, that wouldn't have happened."

His 21-year-old daughter was very shaken up but also very lucky to be alive. "It was her fault - she tried to slow down but her foot hit the gas instead of the brake and she drove into the back of a truck," explains Russo. The Toyota only had 27,000 miles--the insurance company deemed the car totaled. 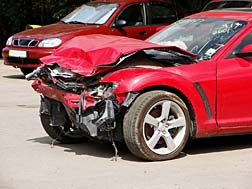 "I saw the car in the junkyard and I was surprised-- and happy--that she came away from it all unscathed," says Russo. "Of course she may have recurring injuries. My insurance company didn't make an issue out of it but I don't know what their investigation will do. My daughter said the driver of the truck wasn't hurt, thank God. But it was a close call."

According to the Automotive Coalition for Traffic Safety (ACTS), frontal air bags are designed to deploy in moderate to severe frontal collisions. The ACTS brochure states the following:

More News
Crash Sensors are located either in the front of the vehicle and/or in the passenger compartment. Vehicles can have one or more crash sensors. The sensors are typically activated by forces generated in significant frontal or near-frontal crashes. Sensors measure deceleration, which is the rate at which the vehicle slows down. Because of this, the vehicle speed at which the sensors activate the air bag varies with the nature of the crash. Air bags are not designed to activate during sudden braking or while driving on rough or uneven pavement. In fact, the maximum deceleration generated in the severest braking is only a small fraction of that necessary to activate the air bag system.

Robert Russo saw that the Toyota Forerunner was collapsed "like an accordion" and it was a write-off, meaning his daughter hit the truck with considerable force. You'd think the crash sensors would activate the airbags on such an impact.