Officials from the US Food and Drug Administration (FDA) said that pools of water on the floor and old, hard-to-clean equipment at a Colorado farm's packing facility were most likely to blame for the recent cantaloupe food poisoning outbreak, according to The Associated Press. 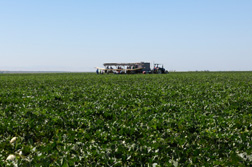 The news source reported that government investigators found a round of positive samples of listeria bacteria on the equipment in the Jensen Farms packing facility on the fruit that was held there at the time of the incident.

A six-page assessment was authored by the FDA investigators following a visit to the farm. The report detailed how the Jensen facility had recently purchased used equipment that was corroded, dirty and hard to clean. The floors of the structure were also found to be in this poor condition, helping to harbor pools of water that could have been the source of listeria, according to the AP.

The FDA sent Jensen Farms a letter following its investigation, noting that its findings had shown that the plant was the likely source of the outbreak.

"This significant percentage of swabs that tested positive for outbreak strains of (listeria) demonstrates widespread contamination throughout your facility and indicates poor sanitary practices in the facility," the organization said in the letter.

Although the disease was also found on potatoes that were processed in the facility, the FDA noted that these vegetables are often cooked before preparation, something that will kill any bacteria on the food, according to the news outlet.

More CANTALOUPE RECALL News
The Centers for Disease Control and Prevention (CDC) said that 123 people became ill following the outbreak, including the 25 individuals who died. This made the cantaloupe food poisoning the deadliest food-borne illness since 1985, the AP reported.

Although the affected food has been taken off the shelves due to the outbreak, CDC officials have warned that the symptoms of listeria sometimes take up to two months to appear. This may mean that more cases could arise and the organization is monitoring the situation because of this risk.

According to MSNBC, the cantaloupes that were contaminated with bacteria could not have been cleaned by consumers after they purchased the fruit. No amount of washing, scrubbing, bleaching or peeling would have prevented the disease.