On October 30 a California state appellate court denied an effort  by TWC Dealer Group to compel former employees to arbitrate violations of California labor law including race and age discrimination, wage violations and wrongful termination. The takeaway for workers forced to arbitrate is a lesson in what constitutes an unconscionable contract. 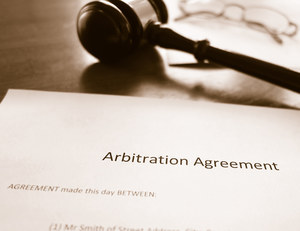 What startled the legal community, though, was a sharp rebuke to Fine, Boggs & Perkins, a well-known California law firm that specializes in employer representation. In Davis v. TWC Dealer Group, LLC, the court also delivered a stinging message about the importance of honesty and transparency.


TWC Dealer Group, Inc. operated a Toyota dealership. In the spring of 2013, Donald Davis, Bonnie Davis and Raymond Davis sought employment at TWC to run its special finance department. The Davises are African-American, and Donald Davis is over the age of 40. All of the Davises were required to sign three separate agreements, each requiring them to arbitrate disputes.

Thereafter, the employment atmosphere deteriorated and the Davises allege that they were the targets of ageist and racist comments. In addition they claim wrongful termination, non-payment of wages and pay stub violations. Ultimately, all three resigned, filed complaints with the Department of Fair Employment and Housing, obtained right to sue letters, and filed a lawsuit in California state court. TWC sought to force arbitration.


As described by the appellate court, the contracts at issue were nearly impossible to understand. The first is one page long, and consists of six paragraphs, all in a very small font. None of the paragraphs are titled. The paragraph that refers to arbitration is full of statutory section references and legalese.

The second contract is two pages long and contains two paragraphs. The second paragraph, which refers to arbitration, is more than a page long. One sentence continues for 15 lines.

The third agreement is similar in length and prolixity. It also appears to incorporate other documents, including an Employee Handbook, by reference.

The trial court found that the arbitration provisions were unenforceable. The provisions of the three were, in some instances, inconsistent with one another and in other instances legally dubious. Overall, the court concluded that the contracts were substantively and procedurally unconscionable.

WHAT IS AN UNCONSCIONABLE AGREEMENT?


As a baseline matter, courts are generally reluctant to interfere with contracts. Freedom of contract is one of the fundamental bases of a market-based economy. Nonetheless, courts will intervene when it finds that an agreement is unconscionable – that it is so one-sided that that leaves one party with no real, meaningful choice, usually because of major differences in bargaining power between the parties.

In determining whether an employment arbitration agreement is valid, California courts look at two issues:  procedural and substantive unfairness. For an agreement to be unenforceable both kinds of unfairness must be demonstrated.

Procedural unconscionability refers to the circumstances under which an agreement was entered. Was it a “take-it-or-leave-it” contract “imposed and drafted by the party of superior bargaining strength?”  Were the terms hidden by the party who drafted the agreement?

Substantive unconscionability considers whether the terms are so one-sided as to be overly harsh or unduly oppressive to the party with less bargaining power.

It is often difficult to argue that a contract should not be enforced because it is unconscionable. The circumstances of the TWC arbitration agreements, however, seem to have been so extreme that both the Superior Court and the Appellate Court were ultimately persuaded.


It certainly may not have helped, especially with the issue of hidden meaning, that the attorneys for TWC appear to have been guilty of sloppy legal drafting in their briefs to the Appellate Court. The court seems to have taken particular exception to the use of ellipses that left out most of the words in sections of arbitration agreements that were quoted in briefs.

More CALIFORNIA LABOR LAW News
Attorneys at Fine, Boggs & Perkins also apparently committed the cardinal sin of failing to inform the court of a legal precedent that weighed heavily against their argument that the Davises’ disputes should be submitted to arbitration. They could hardly have claimed to have been unaware of the decision in OTO LLC v. Kho since they had represented the Toyota dealership in that case, as well.


Workers need to remain mindful that they are often at a serious disadvantage in individual arbitration proceedings compared to class action litigation. Although the particular conduct and the particularly opaque contract language that were present in Davis may not appear in every dispute about the enforceability of arbitration clauses, unconscionability is worth considering as an argument, as these cases come to trial.