In an effort to steer its way around the definition of independent contractor and avoid regulation under Assembly Bill 5 and the California labor law, Uber is re-introducing features it once considered untenable. 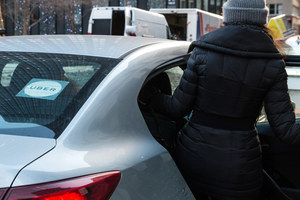 These changes, explained Uber in a letter to its customers, are “due to new state laws,” and that these new laws, i.e., Assembly Bill 5, “could hurt them”, including customers being discriminated against. By giving drivers more control over their rides and making fares more transparent, riders could get rejected from certain trips. For instance, a driver doesn’t want to pick up a customer from a low-income community or refuses a short trip. Drivers would have the ability to see estimated trip fares and decide whether to take the customer or reject a trip without penalty.

On one hand, Uber appears to be giving its drivers more freedom so they will lean more toward independent contractor status rather than employee, and drivers have been demanding more freedom since Uber hit the streets. On the other hand, some drivers are complaining that the ability to set a fare higher or lower than Uber’s pre-set price, another new feature, could end up driving down earnings by pitting drivers against one another and forcing them to compete for riders in a way they haven’t until now, reported the Los Angeles Times.

@LorenaSGonzalez
Uber:
-We want an exemption from AB5.
-We won’t follow AB5.
-AB5 doesn’t apply to us.
-We will exempt ourselves from AB5 by initiative.
-We will sue CA about AB5.
-Oh, wait, we will change our business model to try to fit AB5 #PickALane

Gonzalez is adamant that there will be no changes to let Uber and Lyft off the hook, so Uber and Lyft and other California-based tech start-ups are more than nervous about AB5. Bradley Tusk, an Uber investor who previously served as a political strategist for the company, told the Washington Post that “Obviously Uber wants to make the case that drivers are operating on their own because without that they have no argument on their worker classification…They clearly are worried about losing and want to have a backup plan.”


The new gig-economy bill, or Assembly Bill 5, went into effect on Jan. 1. AB5 “presumes” that all workers are employees, unless the hiring business can show otherwise. Companies, including Uber and Lyft, now must adhere to the “ABC” test, which states that a business must only contract with independent contractors who can fulfill all three of these conditions:

Posted by
Jordan Kohn
on February 9, 2020
This was an incredibly damaging bill. It hurt people's right to attempt to make money should a job pop up. This bill has had a far reaching impact on industries everywhere, and it hurts the worker the most. We must repeal AB5 as soon as possible!