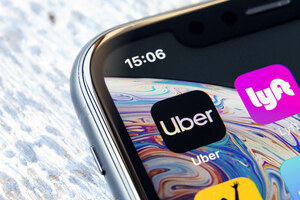 
“Misclassification is like concrete, keeping us underground,” California driver Eve Aruguete told The Guardian. Aruguete is also a member of Rideshare Drivers United, which helped organize the strike. The drivers are demanding better wages and congressional support of the Pro Act, which “would significantly strengthen the ability of workers in the private sector to form unions and engage in collective bargaining for better working conditions and fair wages”.  Another Rideshare organizer told the Los Angeles Times that, "Without the PRO Act, drivers have no control over what companies choose to do… They are completely at their whim."

Strike organizers say that by passing the Pro Act, gig economy firms would have more difficulty classifying their workers as independent contractors. And it would allow Uber and Lyft drivers to rally together and collectively bargain – the act would allow drivers to form a union.


And another, “Silent Strike” is taking place. Drivers are refusing to return to their jobs they consider exploitative. And the pandemic resulted in a record driver shortage. A survey from the University of California, Santa Cruz, and Jobs With Justice San Francisco found that over one-third of respondents lost 100% of their income, and 19% had lost more than 75% of their income. But as more people are vaccinated and go out to restaurants and bars, the demand for rides outpaced drivers because drivers who didn’t work during the pandemic haven’t returned, saying the pay is not enough.


Strike organizers say that Prop 22 has resulted in Uber and Lyft raising prices for riders but at the same time, decreasing the portion of the fares that drivers receive. One Uber driver said that Prop 22 means drivers have less control over where they drive, who they pick up, and how much they make. “Prop 22 was the most expensive lie ever told to California voters,” another driver told The Guardian. Uber and Lyft promised that the passing of Prop 22 would mean its drivers would have flexibility, greater control and greater transparency, but it also exempts gig companies from fully complying with labor laws as its workers are classified as independent contractors: without access to employee benefits such as minimum wage, unemployment benefits, and health insurance.

As well, Uber promised with Prop 22 features that would make it easier for drivers to tell how much a ride would pay and where they were going, “in an effort to prove that its contract work was flexible and gave drivers control. Uber has since reversed that feature for drivers who don't accept the last five of 10 rides they are offered,” reported the Los Angeles Times.

More CALIFORNIA LABOR LAW News
In the beginning of July, Lyft drivers urged California state judge Andrew Y.S. Cheng to “reject Lyft's bids to brush aside their Private Attorneys General Act  (PAGA) and class claims while the California Labor Commissioner litigates a parallel action, saying their cases should proceed separately,” according to Law360. Lyft is trying to send its driver Brandon Olson and another driver to arbitration. Olson filed a misclassification complaint against Lyft back in 2018 and later amended his complaint to include PAGA claims on behalf of other Lyft drivers.  At that time a judge sided with Olson and Lyft appealed.

However, Lyft’s attorney argued that all PAGA claims are prohibited when the Labor Commissioner initiates a direct action against an employer and in that case the court “must dismiss Olson's claims completely and stay any remaining claims until after the Labor Commissioner's action has been resolved,” reported Law360.