Yet another California Labor Law class action is brewing in the sun-kissed State, in support of a technical writer for Sun Microsystems who claims she was denied legitimate overtime.

Dani Heonemier was happily employed by another firm when the company was purchased by Sun Microsystems in 2005. However, Heonemier's relationship with her new employer proved anything but sunny, after she soon found herself sometimes working 60 hour work weeks, often without breaks and most often without overtime. 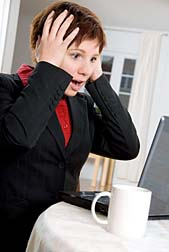 Heonemier, who resigned from Sun Microsystems in 2006—a year after the computer juggernaut bought out the smaller firm with which she was originally employed—has just received class action status for her case, after a Santa Clara County Court Judge certified her legal action on May 13. That certification allows Heonemier to pursue her issue as a class action on behalf of all salaried technical writers who have been employed at, or by Sun Microsystems since 2002. However, the judge also requires Heonemier and her legal team to find another writer who would agree to serve as co-plaintiff in the case.

That could be hard to do, as class actions usually undertake litigation on behalf of workers with similar job descriptions, something that is rare in the computer world. Sun Microsystems argued that the case could not be a class action for that very reason—that writers do not have uniform duties.

The class action could represent upwards of 300 technical writers at Sun, and could cost the company "well over $20 million" in back wages if the company loses the case, according to Heonemier's legal counsel.

The plaintiff alleges that she was often required to work long hours in association with the preparation of a new product release, sometimes spending upwards of 60 hours per week at her computer. The fact that technical writers are well paid at about $100,000 per year is not in dispute. As the job title suggests, technical writing is an exact science and highly technical in nature, requiring accuracy and detail. However, Heonemier and her legal team feel that a high level of compensation should not preclude technical writers from qualifying for overtime pay.

Those exemptions were recently revised for 2008, dramatically lowering the threshold at which employers were required to pay overtime for qualifying employees. In other words, an employee would need to earn far less per year to be considered exempt from the overtime rules. While no employee's base salary dropped as the result of this change, real dollars in the take-home pay packet would be reduced, as employees accustomed to being paid overtime would no longer qualify under the revision. This would allow the employer to pay overtime to fewer employees, and because the threshold was lower, those who do qualify for overtime would be paid at a far lower rate, creating the second 'win' in a decided win-win for the employer.

More News
The change in threshold was accompanied by the right for a California employee to pursue accrued overtime retroactively for a period of years.

Attorneys for Sun Microsystems argued that the case should not be a class action because the writers do not have uniform duties. The company also alleges that Heonemier was not a true representative of the class, and characterized her as a disgruntled employee who performed poorly and required more supervision than others.

Heonemier counters that she worked diligently, and never had a problem until Sun Microsystems bought out her former employer. After working long hours to complete a project and approaching Sun for overtime, she was accused of poor job performance.

If Heonemier wins, it could prove costly for other computer tech firms.