Our love-hate relationship with Uber and Lyft –Can we Compromise?

Portable Benefits may be a solution to the ongoing Uber and Lyft Misclassification Issue. 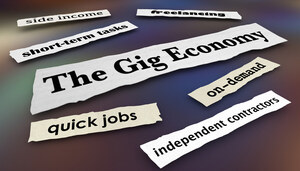 We all know that the California labor law threatens the on-demand business model by clinging to the traditional model of “employees” versus "independent contractors.” The Golden State's labor agency cites Assembly Bill 5 to classify drivers as employees and not independent contractors and argue that Uber and Lyft deliberately misclassified drivers "as a means of unlawfully depriving these workers of a broad array of statutory protections applicable to employees,” but the real world doesn’t work that way.

“When 3 million Californians are without a job, our leaders should be focused on creating work, not trying to shut down an entire industry,” said Uber spokesperson Davis White. While Uber and Lyft are inundated with litigation, others (like Mayor Liccardo) are finding solutions that may benefit everyone.

In the real world, most drivers cannot work 8-hour shifts, in fact 82 percent of Lyft drivers work less than 20 hours per week based on customer demand. While independent gig workers may make less money in a week than, say a Walmart greeter, it’s better than no income at all: some drivers might have only these two options during this pandemic of unemployment. On the other hand, Walmart greeters do receive benefits and do not work for sub-minimum wages. And there are safety measures in place.

Chances are, many Californians are looking forward to Uber and Lyft’s downfall, but how many of those “brick and mortar defenders and mere Luddites” can say they never hailed a Lyft or Uber car, never called DoorDash, Instacart or Postmates?
And let’s not forget that Uber and Lyft in California deliver food to homebound seniors, drive patients to and from medical appointments, support America’s largest bike-share networks and provide free rides for wildfire evacuees.

During a CNN interview, Uber CEO Dara Khosrowshahi told Christiane Amanpour that Uber did go too far at first, believing the authorities were wrong and opposed to letting “good ideas grow”, and with so much power, Uber went from constructive to destructive power. “We went too far with regulators. We may disagree but ultimately we are a citizen in the cities we operate and we have to respect that,” said Khosrowshahi. He went on. “We oppose the law, not the idea. The traditional view of work—having a full time job with one company your entire life is outdated. The new way is independent work when you want to, where you want to. The nature of independent work should change.”

Khosrowshahi says that under AB5 gig workers are independent. Uber drivers get vacations whenever they want. Uber has offered its drivers healthcare and minimum earnings and want them to have a voice. Khosrowshahi thinks there is a way to offer drivers the best of both worlds, “but trying to fit our model into the old construct is not the right job.”

So what is the right job?

“Most importantly for large-city mayors like me, the on-demand economy enables thousands of struggling residents to earn supplemental income to make rent amid a pandemic of unemployment,” says Mayor Sam Liccardo. “A ridesharing network depends upon having lots of part-time drivers available for brief, peak periods of ride requests — such as during rush hour, when bars close on a Saturday night or the arrival time for several international flights at the airport.”

Liccardo’s solution is to create a “portable fund” where every company pays into an individualized fund an hour’s worth of the cost of benefits for every hour a contractor works. “That portable fund would stay with a gig worker throughout his or her life, like Social Security or a 401k, and workers could choose to spend it on health insurance, retirement or any other benefit they choose,” explains Liccardo, who details his plan via NBC News platform.

More CALIFORNIA LABOR LAW News
On August 10, Khosrowshahi opined in the New York Times that gig workers deserve better. He believes that new legislation is necessary to create a “third way” for gig workers. “Our current system is binary, meaning that each time a company provides additional benefits to independent workers, the less independent they become. That creates more uncertainty and risk for the company, which is a main reason why we need new laws and can’t act entirely on our own,” writes Khosrowshahi. “As a start, all gig economy companies need to pay for benefits, should be more honest about the reality of the work and must strengthen the rights and voice of workers.”

He goes on. “I’m proposing that gig economy companies be required to establish benefits funds which give workers cash that they can use for the benefits they want, like health insurance or paid time off. Independent workers in any state that passes this law could take money out for every hour of work they put in. All gig companies would be required to participate, so that workers can build up benefits even if they switch between apps. Had this been the law in all 50 states, Uber would have contributed $655 million to benefits funds last year alone…”