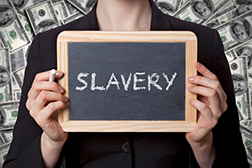 The former owners of L’Amande bakeries have been handed a default judgment of $15.2 million in damages and fees for trafficking 11 Filipinos to the United States to serve as domestic servants and back-of-the-house employees at the two bakeries owned by defendants Analiza and Goncalo Moitinho de Almeida. This incident is nothing short of modern-day slavery.

According to Inquirer.net, one of the plaintiffs, Gina Pablo-Grossman, said that one of the Almeidas told her,
“I don’t care if there is no customer or if the customer is a fly or a mosquito, you are not allowed to take a break to eat.”

The Almeidas subjected the workers to “abusive conditions, including workdays as long as 17 hours and wages as low as three dollars an hour,” reported Asian Americans Advancing Justice (May 23, 2016). “They verbally abused the workers, referred to them as ‘dogs,’ and imposed $11,000 in debt bondage on each worker. [The workers had to work for them for three years] The defendants also threatened to cancel the workers’ visas and harm them and their families in the Philippines.”

The plaintiffs have also been given T visas, which gives human trafficking victims temporary legal status and work authorization. They can also bring their families to the United States. (The Victims of Trafficking and Violence Protection Act, which was passed in 2000, gives law enforcement agencies more strength to investigate and prosecute human trafficking, and also offers protection to victims.)

The Almeidas also tried to sell all their assets, including their million-dollar residence, and in 2015 they went back to the Philippines. The lawsuit also sought increased damages for fraudulent transfers of assets whereby the Almeidas “absconded and removed assets to the Philippines.” Analiza Almeida wrote the following to the Filipino Chronicle:

Workers at Tesla Motors made two dollars an hour more than the Filipino workers. According to investigative reporters at First Digital’s Bay Area News Group, Tesla Motors paid its foreign contract laborers $5 per hour, 10 hours a day and six days a week to expand its government-subsidized California auto plant. Wait, it gets worse…

More CALIFORNIA LABOR LAW News
Tesla collected $517 million selling government-mandated environmental credits to competing automakers and used the cash to fund operating losses, build out sales distribution and add to the manufacturing facility. In 2015, Tesla hired a foreign contractor to ship 140 workers from Croatia and Slovenia. They were building a new paint shop at the carmaker’s Fremont plant when one of the contractors sustained a severe injury on the job and he filed a whistleblower lawsuit.

This isn’t the first time Tesla has violated California labor laws. In March, approximately 350 construction workers walked off the job complaining about low wages of $12 to $14 per hour and complaining about the outsourcing of work to non-union labor. (Experienced workers would typically be paid about $48 per hour in wages and benefits and get California overtime after eight hours.)

Tesla may be facing federal fines of $5,000 per worker, $15,000 for each and every violation of the California Labor Code, and be banned from the B1/B2 and HB-1 Visa programs for life. And it may be required to top up all its illegal under-payments, including overtime.