On Friday, one of Los Angeles' largest Chinese-language newspapers was ordered to pay 200 employees millions of dollars because they were denied overtime pay for years. In addition to the compensation ordered to the employees by a federal judge, the company is also subject to various labor law violations in California.

The Chinese Daily News employees will receive $5.19 million, which includes penalties against the company for violating labor laws. The amount also includes 10% interest on the original award amount of $2.5 million. The $2.5 million was awarded by a jury in 2007. The same Federal District Court judge who heard the case in 1997, Consuelo B. Marshall, also presided over the hearing on Friday. 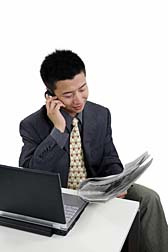 The lawsuit was brought against the paper in 2004 in which the employees accused the paper of withholding overtime pay from them and also denied them meal breaks and regular breaks during shifts that would last 12 hours or longer. The wages that the paper was ordered to pay date back to 2000 and, according to lawyer Randy Renick, many of the employees involved in the suit were either forced to quit their jobs or they were fired.

The 200 employees who filed the lawsuit include delivery drivers, production workers, secretaries, advertising salespeople, and 25 reporters. All of these employees worked out of the same building and all received the same treatment from their supervisors.

Lynne Wang, one of the plaintiffs, was fired in 2005. She described the environment as being one of nonstop work that included fear and intimidation. She says that this fear and intimidation is what kept the employees from putting pressure on the company to pay the overtime that was owed to them when they realized that they were not receiving what was rightfully theirs.

Ms. Wang said in her statement that reporters had to write five stories each day, which meant they were not able to take breaks between interviews and news conferences. The same went for production workers and some of the labor-oriented employees within the building. They would spend hours with the presses without getting their required breaks and mealtimes. She further stated that the sales quotas were too high and that drivers were forced to contend with long delivery lists that were spread throughout the city during rush-hour traffic.

More News
Since the employees of the paper are all Chinese, Ms. Wang said they did not know the laws. She said in her statement that if they complained about their job, they were asked to leave because there were others who would love to have their jobs. She said that her days would turn into 17 hour days and would last all night if there were presidential elections or some other political activity occurring within Taiwan. However, she alleged that the supervisors were altering the time sheets for the employees in order to hide the hours they were actually working. Even when her workload increased, her concerns were met with animosity or were ignored.

As for the end result of the lawsuit, the employees are very happy and feel that they have received some kind of justice despite the difficulty to do so and it is hoped that the newspaper will never be able to do such things to employees ever again. Perhaps this can serve as an example of how workers are standing up for their rights.