A jury has awarded a $3 million verdict to a California state worker whose supervisors allegedly violated California Labor Law by ignoring his allergies to perfumes and cleaning products, according to the Sacramento Bee. 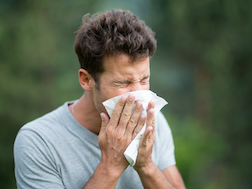 A Nevada County jury delivered the verdict in May 2017 during a trial for a lawsuit filed by John Barrie, a California Department of Transportation (Caltrans) worker who filed the suit in 2013. Barrie claimed that his supervisors repeatedly ignored instructions to keep perfumes and chemicals like Comet and Windex away from him, according to the Sacramento Bee.

The Sacramento Bee reported that Barrie, 60, began working for Caltrans in Nevada County as a staff service analyst in 2005 but began to have trouble at work in 2010 when his new manager disregarded accommodations that Caltrans had been making for Barrie.

"From October 2010 until February 2011, he said in his lawsuit that he was exposed to chemicals a dozen times at work, mostly from cleaning products. The supervisor told him she didn’t want to hear about his complaints, the lawsuit says," according to the Sacramento Bee.

After Barrie filed internal complaints, along with medical paperwork to document his allergies, his direct supervisors moved him to different parts of his building for unclear reasons and tried to make his work place unappealing, according to the Sacrament Bee.

After a regional administrator ordered workplace accommodations for Barrie's allergies, a "surprise inspection" in early 2012 found chemicals and scented products in the workplace, the Sacramento Bee reported:

More CALIFORNIA LABOR LAW News
"A human resources manager’s notes from that inspection showed that said Barrie’s managers wanted to discipline him for contacting Caltrans’ equal employment office, contending he had gone 'outside the chain of command,' according to Barrie’s lawyer."

According to the Sacramento Bee, Barrie's managers retaliated by moving his desk to the lobby and demoting him to a job as a receptionist.

"He also continued to notice perfume in his workspace. In one incident, he felt a lumbar pillow he kept at work had been soaked with perfume," the Sacramento Bee reported. “To this day, (Barrie) finds his work space is often doused with perfume."

The jury delivered the $3 million verdict after a one-month trial.

According to the Sacramento Bee, Liza Whitmore, a spokeswoman for the Caltrans district where Barrie works, said the department “has reviewed the decision and is weighing options for a possible appeal.”