California Labor Law: "Working at Blockbusters Is Like a Bad Movie"

Ruthann worked eight years as a dedicated store manager for Blockbusters before she was terminated. According to California labor law, employment in the state is generally "at will," but it doesn't give employers the right to fire an employee based on violations like discrimination and retaliation. 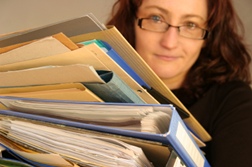 Blockbusters has a bad track record of treating its employees unfairly. A class action lawsuit filed in 2005 accused the video giant of intentionally refusing to pay overtime to a large number of its office employees—Ruthann being one of them. The lawsuit claimed that Blockbuster tricked its employees into believing that they were not entitled to recover for overtime they worked. The company converted a large number of employees from salaried to hourly in August 2004, telling them that they were entitled to overtime only under the new regulations, i.e., those implemented under George W. Bush.

Ruthann had to take six weeks' medical leave in 2007 and says she returned to a "hostile work environment."

"I thought they were about to give me my final check because another manager told me that he was taking my position. 'We have to make room for the young,' my district manager said, then quickly corrected himself. I understood that to mean I was getting fired because of my age—I was 60. They did an about-face and HR told me 'they were putting me back in the system,' which meant I didn't get benefits while I was on med leave. I was a salaried manager so I was supposed to accrue vacation pay during those six weeks.

"Then I had an injury and took almost four months off work, with a doctor's note. When I returned, I was told by my district manager that they were 'doing just fine without me.'

"After a few months of making my life miserable, I brought up the issue of not getting breaks on time at a staff meeting. 'If a person has a chair, they can sit on it for 10 minutes and get a break,' said the district manager. I said that was illegal. Then the store manager asked if he could leave the store during his lunch. He was told that a good manager doesn't leave. Again, I said that wasn't right.

"Soon afterward, the district manager and regional manager came into my store. They said the loss prevention manager had been going through my paperwork: I was told he was working on audits. They brought up an issue about coupon fraud and everyone in the store was going to be fired. I said it was a training issue and defended the staff.

"Then they interviewed me. 'So you are giving movies away to your friends?' they said. If I said no, I didn't do that, he said that I did. He said I gave candy away and asked how many rewards did I sell with this coupon? Then he got angry when I had trouble hearing him; I am hearing-impaired.

"'You don't care about keeping your job, so I'm calling corporate to tell them you are refusing to cooperate during an investigation,' he said, just like a line out of a bad movie! At one point I said that I needed to see an attorney if they were going to treat me this way.

"Then I said, 'Whatever'. The district manager asked me if I wanted to resign because it didn't look good. I said that I would stay until they trained someone else and then I would leave. But I was asked that day for my keys and was told to get my personal belongings.

"It was wrong to terminate me. I was dedicated, and this was underhanded and unfair. I believe I was fired because of my age and because I was paid too much money for that store. And they didn't like my complaints."

According to the California Department of Industrial Relations,


"There is no legal requirement in California that an employer provide its employees with either paid or unpaid vacation time. However, if an employer does have an established policy, practice, or agreement to provide paid vacation, then certain restrictions are placed on the employer as to how it fulfills its obligation to provide vacation pay."

Ruthann says that Blockbusters agreed that salaried employees accrue vacation pay while on medical leave. What's more, if your employer discriminates or retaliates against you in any manner whatsoever, you have the right to file a discrimination/retaliation complaint—but the statute of limitations does apply.
READ ABOUT CALIFORNIA LABOR LAW LAWSUITS

If you have suffered losses in this case, please send your complaint to a lawyer who will review your possible [California Labor Law Lawsuit] at no cost or obligation.
Request Legal Help Now

Posted by
erin
on April 13, 2013
ive worked at blockbuster for a year and i can honestly say ive never been treated so bad as an employee. i wanted to work there since i was a teenager and finally did at 27yrs old. at times it was fun yes but only because of the regular customers and sharing movies that are good with eachother. free rentals was the best part. but having other jobs before i knew things werent fair or done the legit way a normal buissness would do them. i never recieved any type of raise or bonus. the manager looked at every csr like they were less than even though before being a blockbuster manager he was a home depot caraige boy. the company definately wasnt customer service friendly either. i could go on and on with reasons on why this company was the worst and most unfair company ive ever worked in but believe ive said enough for anyone who reads this to get the idea