A former Facebook employee, 52-year-old Gary Glouner, alleges in a lawsuit filed in California Superior Court that he was unlawfully terminated from his job in November, 2015. The suit alleges the company discriminated against him because of a minor cognitive disability and because he was not part of the company’s preferred demographic of “recent college graduates” or a “digital native”. 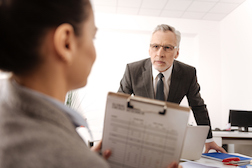 “We think we can put together a very solid case given the documentary evidence we have been able to pull together,” says Glouner’s attorney, Ebby Bahktir from the firm of Livingston Bakhtir in Los Angeles. “It is going to be a complicated case. We anticipate they will put up a fight on just about everything.”

In 2013, Facebook acquired the company where Glouner had been employed since 2007. According to the statement of claim Glouner “performed the essential duties of his job competently and to the complete satisfaction of Facebook and its predecessor”.

Glouner had a brain injury as a result of a tumor that had been removed several years before. Facebook was aware of his condition and how it affected him. However, Glouner’s lawsuit claims Facebook failed to deliver accommodations necessary for him to succeed at his job.

“It almost appears that they tried to press his buttons or put him in a position where he was bound to fail, says attorney Bakhtir. “He had certain very, very minor but cognitive deficits that prevented him from doing certain types of work. After he began asking for accommodations they began assigning him certain types of work that they knew, or should have known, would have been affected by his condition.”

"...once you are fired from a tech company then it becomes very hard to find work in the industry”
After returning from a period of leave Glouner discovered that a number of older people in his office had been let go. When Glouner asked why they were no longer there, according to the documents, management told him that “they were a poor fit” and “they didn’t get it” and “they didn’t move fast enough”.

Glouner heard comments made such as “old people are just creepy” and “old people shouldn’t be working at Facebook; they just don’t relate”.

“It was an ongoing thing where there were a lot of jokes about older people at Facebook,” says Bakhtir. “Facebook’s culture is that it is young company, filled with smart people and older people are not able to keep up with that in terms of energy and technological advancement. It is reflected in their marketing and everything they do.”

In December of 2014, Glouner alerted his supervisor about what he believed to be unlawful and unconstitutional activities by Facebook. Glouner said, Facebook was engaging in “tracking, and/or selling data relating to countless users across the United States who had expressly opted out of being tracked thereby breaching said users’ constitutionally protected privacy interests”.

Despite the fact his supervisor told him not to talk about the issue any further Glouner raised the issues with higher level managers.

“He was trying to help them correct this problem. They took offense and circled the wagons,” says Bakhtir.

Glouner soon found himself accused of poor performance and out of a job.

More CALIFORNIA LABOR LAW News
“Gary Glouner wants his story to be told. He went through quite a bit.

“Glouner has been looking for work and doing some consulting work, but as far as an actual job he has been basically living off his savings. I think one of the problems is once you are fired from a tech company then it becomes very hard to find work in the industry,” says Bakhtir.

Reached for comment by LAS, a Facebook spokesperson denied the allegations and said, “Mr. Glouner’s complaint is full of inaccuracies and untruths. Facebook is proud to be an equal opportunity employer, and worked extensively with Mr. Glouner to accommodate his medical issues. His separation from the company had nothing to do with age, disability or any of the reasons stated in his complaint.”
READ ABOUT CALIFORNIA LABOR LAW LAWSUITS