Carol knows that her employer has violated California labor laws by not paying meal breaks and travel time, and as a consequence she was paid less than minimum wage some days. And she isn’t afraid of telling her boss that retaliation is also a labor code violation. 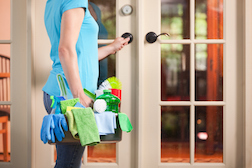 Despite bill AB-889 designed to protect domestic work employees, Carol is just one of 340,000 workers who could be making below minimum wage. She works for one of six employers of domestic workers who fails to pay the minimum wage in California, according to The Guardian (May 2016). Researchers with the University of California Los Angeles Labor Center found that out of two million domestic employers in the state – those who hire people for house cleaning, home care support and childcare – about 17 percent violate the minimum wage law.

“I’ve been cleaning houses with this service for almost three years. I was their first and only employee until work started picking up,” says Carol. Sometimes she only works three hours a day but used to average ten hours a day, taking into account travel time. And that’s her main bone of contention.

“Every morning we drove to the office and picked up cleaning supplies, such as clean towels,” Carol explains. “The morning drive took 30 minutes and returning took about an hour due to traffic.”

A few months ago Carol had to drive 80 miles round trip to a client’s home and she asked for gas money. Her boss said they reimburse for gas outside of a 20 mile radius of the home office. She was three miles outside of that radius and received a check totaling $3.24. Carol reminded them of the California Labor Code Section 2802(a) and Title 8 of the California Code of Regulations to determine reimbursement for work-related use of a personal vehicle.

“The boss argued that federal law says an employer doesn’t have to pay mileage,” says Carol. “I said, ‘You are wrong because state law overrides federal (that says it isn’t mandatory) and the state of California says you have to pay.’ She also told me that information came from her attorney. I suggested she get another lawyer, knowing she was only trying to intimidate me.”

Carol’s boss came up with a policy. They would pay .54 cents per mile with restrictions: they could only drive to the office once a week. “Two days later they brought our supplies to the house we were cleaning. And they made us use our travel time as a break,” says Carol. “We used to take a 15 minute break while cleaning a house. Then they implemented break policy: If we have an hour gap between houses, ½ hour of that is unpaid as lunch. But that hour is travel time, so we have to eat and drive at the same time?”

More CALIFORNIA LABOR LAW News
Last week Carol was called into the office because she had five write-ups that she says are all bogus. “For instance, one write-up was because my partner arrived 45 minutes late to the first house we were cleaning and then she couldn't find her phone, so we were late for the next house. Only I got written up and I believe this is retaliation for standing up for my rights.

You’re probably wondering why I am still working here. Because I’m not a quitter and I like my job. I was homeless at one time and I don’t pay rent where I live now ---how couldI afford to pay rent when sometimes making $7 per hour?”

Carol figures she is owed about $3,000 and more if she is wrongfully terminated for retaliation and they go to court. She knows the California labor law. “I believe they want a paper trail so these write-ups are leading up to firing me,” she says. “I know it isn’t much money for an attorney but it’s the principal of it. No one should get away with paying less than minimum wage.”