Next time the restaurant tacks on a “service charge” you might want to ask whose getting that money. If you think it’s a big tip for your waiter you could be very wrong – especially if you’ve just had dinner at the Hilton Hotel in San Francisco’s Union Square. 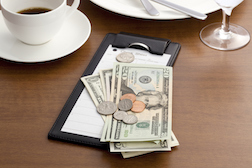 Attorney Shannon Liss-Riordan represents a group of unionized food and beverage workers that have been in a major legal row going back almost four years over who gets the service charge money.

“That is a common scenario in the hotel industry. Service charges are added to the bill and customers think the gratuity is included in that charge and they don’t have to add anything else. That is just another way that the worker gets hurt by this kind of situation,” Shannon Liss-Riordan from the San Francisco firm of Lichten & Liss-Riordan.

The workers argued that under California law the 20 percent service charge that is typically tacked on to the bill are actually tips that belong to them.

The San Francisco Hilton argues it has a right to a substantial portion of the money and then shares out the remaining 25 percent to staff management and servers.

The hotel also argued that because the workers were unionized they had no right to bring a private action against the hotel.

“That was the whole point of the Ninth circuit decision because they have the protection of a union they don’t need to bring a private action in court,” says Liss-Riordan. “We succeeded in persuading the Ninth Circuit that that is not the law. A union contract does not pre-empt other types of wage claims that they might bring that are independent of the contract.”

Liss-Riordan recently managed to turn that argument around before the Ninth Circuit arguing that service charges in other states like Hawaii and New York go directly to servers. She’s been duelling with hotel chains across the US for 20 years.

Most of those legal challenges has been issues over tips.

More CALIFORNIA LABOR LAW News
"I have represented many hotel workers in a number of different states, Massachusetts, Hawaii, New York, Florida,” says Liss-Riordan. “I’ve dealt with Hilton, Marriot, Four Seasons, Ritz and lots of others.”
There is big money in tips and all businesses are always looking for ways to improve their revenues. In businesses where there is gratuity money employers often look for ways to access that cash before it gets into the hands of workers.

“It’s pretty amazing how far reaching this is. It’s just a big area where employers can skim something off the top and it actually happens quite a lot.”

The Hilton servers in San Francisco want the Hilton to turn over all service fees they charged over the last four years to them.