“This dog delivery company is cruel to us drivers and the dogs we deliver across the country,” says Randy. “They have violated the California labor laws and I am pretty sure they have broken the California Law regarding animal abuse.” 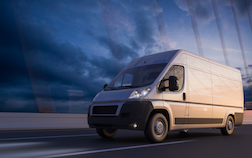 Randy delivered dogs all over the country, from breeders in California to breeders in New York, for instance. He often drove upwards of ten dogs – mainly bulldogs-- thousands of miles in a van and sometimes the journey took 15 days. As a nation of pet lovers most of us immediately think of animal abuse, and that is one issue. But first up is Randy’s labor law complaint.

“A few times I got caught in a snowstorm and had to pull over—I’m from Los Angeles and not used to snow and the van didn’t come with snow tires,” says Randy. “One night it got so bad that you could only drive with chains and then the highway was shut down. I slept in a gas station parking lot with six French bulldogs.”

Randy also had stomach flu and was so sick he stayed in the parking lot for 12 hours. He got paid $100 per day and worked 21 days in a row. “Instead of paying me overtime the owner told me to take five days off,” says Randy, “and he only paid me $1,400 for those 21 days because I took too long.”

The deliveries took so long because Randy had to pick up more bulldogs, affectionately known as “bullies”, along the way. On this particular trip he had to zig-zag across the country, from California to Florida to Connecticut. “I had to sleep with the dogs too and it got really stinky in the van – a Nissan Plus,” Randy says.

The dogs were transported in cages. Sometimes Randy would walk them around the block or a rest area off the freeway. “It’s a gamble with all these dogs figuring out when they need to go to the bathroom,” he adds. “My boss instructed me to put them on a diet and feed them once a day. These guys were getting skinny.”

After driving 1,200 miles straight, Randy and his co-worker delivered the van to the owner’s house—the company is run from his home—and they expected to get paid. “As soon as I turned the keys over to his wife he started yelling at me and refused to pay us,” says Randy, “and that was my last day of work.”

More CALIFORNIA LABOR LAW News
Randy filed a complaint with California’s Labor Commissioner. At the very least he wants to get paid $700 for the balance of the 21-day delivery. Randy also wants to lodge an animal abuse complaint.

California has Penal Code 597 PC in place that protects animals and makes animal cruelty a crime. And the crime of animal abuse takes place whenever an animal is the victim of cruel treatment or neglect. So has the owner of this dog delivery company abused the animals?

According to PC 597 animal abuse, leaving an animal unattended in a vehicle can lead to criminal penalties. Of course these dogs were left unattended at times—Randy also had to relieve himself, among other things.

And the owner may be guilty of “Intentional Neglect”, which occurs when an animal is deprived of food, water, shelter, or veterinary services. As Randy said, “the dogs were getting skinny”.