Diana Meera had a difficult pregnancy, particularly the night she almost gave birth in the large retail store where she works. Diana wasn't allowed any time off, until her baby was born prematurely at 7.5 months. 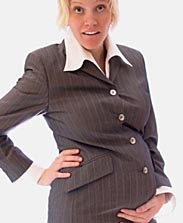 She took her three months maternity leave but was also due vacation pay. "I was going to lose my job if I took any more time off," she said.

"Our department manager told me that I was only entitled to 12 weeks off. But I still had vacation pay due as I hadn't taken any time off in over a year. He told me that I just had a vacation. I said, 'Hello, I just had a baby—it wasn't a holiday.' I never got a vacation in 2006 and even if I asked for a few days off, they would just say, "We'll have to see about that.' I am an immigrant in this country and at the time, I didn't know any better. I just showed up and did my job and did whatever they told us.

But now that I have talked to my fellow workers (who also don't get vacation pay if they are immigrants) I think I have been taken advantage of. Now that I have gone to other places and started looking for another job, I have told retailers what happened and they can't believe that we put up with this. One retailer where I applied said 'You aren't American so you probably don't know about your entitlement to vacation time.' My management also knew that I had to take it easy when I was pregnant. I gave them a doctor's note that said I could only work eight hours a day, five days a week. But I worked 60-70 hours a week over six day weeks leading up to Christmas. And the week of Christmas I worked 80 hours over seven days, right up until Christmas Day."

Diana's daughter was born at the end of January. Perhaps she might have gone full-term if she didn't have to work so hard during her pregnancy.

Not allowing Diana to take two weeks vacation (or vacation pay) is illegal. Unfortunately, she has no idea how much is owed to her because she didn't keep track of all her overtime. It gets worse. Diana has never been compensated for working through lunch or 15 minute breaks. "Many times that were too numerous to count, I worked nine or ten hours straight, and so did many of my co-workers," she said.

"My job is to manage the front of the store (although I am paid an hourly rate) which means I have to stand on my feet all this time. If you have to go to the washroom, you'd better pray they don't find out otherwise they will page you. And when they do page, you have to call the office as soon as you get out of the washroom, walk up to the supervisor and explain why you have been gone for a few minutes - they just holler at you to get back on the floor.

More News
I am from Trinidad and I believe they took advantage of me because I am an immigrant and a woman. This is a male-dominated company and it seems that the women who work here are generally subservient, or they are expected to be. A lot of Mexican people were also taken advantage of and I don't think they were aware of not getting paid for breaks.

I feel this is wrong but I can't leave without another job. I have been in contact with the labor board and they said I am entitled to money for my breaks and missed lunch times. I'm not money-hungry but if something is owed they should pay and follow the correct procedures. So many employees worked like me this past Christmas and didn't get paid. This is very unfair."

Needless to say Diana and her co-workers didn't get any Christmas bonuses. Several labor laws have been broken at this establishment - not only do they owe vacation time and overtime, they can also have a racial discrimination lawsuit on their hands.

If you are employed in the State of California and feel that your employer or a co-worker has violated a state or federal employment law, please contact a [California Labor Law] lawyer who will evaluate your claim at no charge.
Request Legal Help Now