Racial Discrimination and Harassment at US Mail

Chris was looking forward to a rewarding career as a postal worker when he began six years ago in Burbank, but a transfer has turned the past two years into a battle against discrimination. After buying a house in the high desert he transferred to a postal outlet in Hesperia. All went well at first until the person who hired him was fired and the new postmaster subjected Chris to systematic harassment which cost him his health, rightful hours and a good chunk of his salary.

"The new postmaster had a real bad attitude towards me," explains Chris, "and when I asked him why, he replied that he didn't like me and wanted to get rid of me. He is Hispanic, hired all Hispanics, and I'm a white male. He cut my hours big time. Because of my transfer I dropped down to part-time flex status with guaranteed 40 hours but I saw people below me working my hours on my route and he gave my overtime to them. Not only that, he criticized my uniform and my boots, but they were always in good shape.
At first I thought his treatment was like an initiation then I saw others working while I stayed home. He'll call me when I was halfway to work - it's 18 miles one way - and send me back home, wasting my gas." 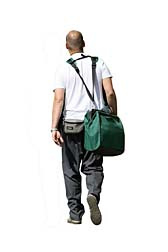 "Finally I had an anxiety attack, and I've never had that before. I went to the doctor and you know what he told me? To quit, or get another job. But this is supposed to be my career!
I took a family medical leave for a month then went back but I had to take another week off. Now I'm classified as having a disability. I had over 400 hours of sick leave added up from Burbank and at Hesperia 200, I was never sick"

Chris filed with the Union but found them unsupportive.
"They'd find excuses in the handbook to take away my grievances. I told them I knew this kind of situation had been filed elsewhere and won but they just told me to quit. I couldn't afford to but I did start looking for other jobs but no one pays as much as the post office. I knew this guy who did the same, he told me to do it exactly as he did but he wasn't married, no kids and paying $300 in house payments. He didn't have as much to lose as me. They knew I needed the money."

"Back at work they would back me into a corner, saying 'you can't do this, can't do that'. As soon as I walked in the door they'd jump on me. I really feel it was discrimination and I have witnesses who saw them and heard them. One time they messed up my paycheck so I was late with the mortgage and I had to pay late fees."

"I'm trying to get back my sick leave, which was not my fault. I then filed with the Equal Employment Opportunity (EEO) it's nationwide and we met in July 2007 and they too told me it was best to leave. If I brought my doctor and lawyer in I'd have to pay their food and board and all that."

"I ended up transferring back to Burbank and in the two months it took the transfer to come through, my postmaster loaned me out to Burbank. EEO said they'd never seen this guy move so fast."

With the housing market in jeopardy, Chris has no choice but to hold onto his house near Hesperia.

"I almost lost my house because of the housing market. Now I have to drive the 87 miles both ways every day. If I'd known this was going to happen I'd have stayed in Burbank. My friend there made $80,000 last year and I only made 40.

More News
When you want to transfer you put in five choices. I'd seen other offices and they were all more or less the same but up there in Hesperia it was all backwards, there was some illegal stuff going on - if only the public knew. Now I'm back at the bottom of the list in Burbank, no holiday pay, only 40 hours guaranteed."

"I've called lawyers. When one of them told me I was the wrong race and the wrong sex I just didn't know what to say! All I want is to get paid back the money I've lost in overtime being given to other people. I had to max out my credit cards to pay for food and the mortgage. I'm exhausted and I still have anxiety attacks. And I don't trust anymore, I've become paranoid. I've heard of other carriers get legal help but I can't seem to find the right lawyers to point me in the right direction."

If you are employed in the State of California and feel that your employer or a co-worker has violated a state or federal employment law, please contact a lawyer involved in a possible [California Labor Laws Lawsuit] to review your case at no cost or obligation.
Request Legal Help Now