Rob Parks (not his real name pending a lawsuit) was a veteran with a California County probation department when he was terminated over a gun incident.

Although he was reinstated, Parks returned to a hostile workplace and faced retaliation for an honest mistake.

I accidentally fired a round from my gun into the floor," says Parks. "As crazy as it sounds, I forgot that I had loaded the gun and killed off the carpeting - thank God that's all that was damaged and that I remembered to aim the gun down and away. I had actually emptied my gun first to put on a different set of grips; the gun was in my hand and I thought it was empty."

But his superiors didn't see it that way. Parks was let go and was off work for about a year until he was reinstated, thanks to civil service protection. He was also reimbursed for the year and, although his back pay didn't fully cover his lost wages, his attorney advised Parks to settle. And he was anxious to get back to work. 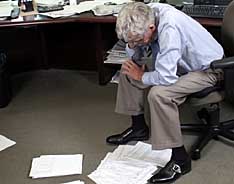 ""When I came back, I was discriminated against by my fellow workers," says Parks. "I was sent to a desk job and have been there for the past seven years, to a job nobody wants. As well, the department's policy is to transfer everyone every 18 months for professional growth development. I have been transferred once in seven years.

Here's the other thing - I have been passed over for promotion more times than I can count, even though I rated high on two supervisor tests and was placed in the number one group for promotion to probation officer #3. I have had standard evaluations for seven years and there were no unsatisfactory evaluations before the gun incident. I have talked to upper management and they told me that they can't forget the past and that I need to do more things to redeem myself. I have joined work-related committees, taken on extra duties and volunteered wherever and whenever possible.

I am now 56 years old and I feel at this point, it's clear that I am not getting the same consideration as younger employees with less experience and abilities. This is going to affect my pension - I won't be able to retire at the same rate as my contemporaries who are in higher management positions.

How long can they hold a grudge? When I returned to work I was 'welcomed back' by the deputy chief. He told me to work 8 to 5 - period. 'We want nothing extra from you,' he said. In other words, I came back to hostility. He has since retired but unfortunately, his legacy lives on.

We have civil service appeal rights so the incident that resulted in my being terminated is history, it has been resolved. However, my contention is that they are holding a grudge in retaliation for me exercising my rights. That is the bottom line.

If I go ahead with a lawsuit, I will be hated. I want to stand on my own abilities but nobody will recognize them. I have no option now; I have nothing to lose and have to take care of my family. As I understand, there are experts who will determine my pay benefits. What I should have expected in this 30 year career was substantial and I stand to lose a lot. I don't want to make waves but how long must I pay for this mistake? To my way of thinking, retaliation is discrimination.

More News
According to the [California Chamber of Commerce website], "Adverse employment action" must be one that causes substantial and tangible harm, such as a change in compensation or position. Examples of adverse action include the following:

If you are an employee in the state of California and are concerned about discrimination or harassment, please contact a [California Labor Law] lawyer who will evaluate your claim at no charge.
Request Legal Help Now