Although San Francisco City Attorney sees the $5.325 million DoorDash settlement as a victory, others say that amount isn’t nearly enough. And in the wake of an investigation, a new bill will give tip protections to drivers.

San Francisco officials see the $5.325 million DoorDash settlement as a victory --and it’s the largest amount ever recouped-- after an investigation found that the food delivery company misclassified California workers, used customer tips to subsisize workers’ base pay, and failed to provide workers both sick leave and health care coverage. 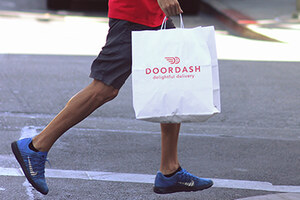 The labor office alleged violations of San Francisco’s health care security and paid sick leave ordinances, reported the Associated Press. The ordinances require employers with 20 or more workers to spend a minimum amount on health care benefits per covered employee and to provide sick leave to all employees in San Francisco. However, after the city is compensated for its investigation, the average amount each “dasher” winds up with totals $1,141. But a new bill will go into effect January 1, 2022 that will ensure delivery workers get all their tips and more—a victory for both drivers and customers.


DoorDash must have already recouped its costs spent promoting Proposition 22 ($218 million, along with other San Francisco-based food delivery companies Uber, Instacart and Postmates), because its CEO Tony Xu took a $413 million payout last year, according to the Wall Street Journal. The Prop 22 ballot is a measure to ensure their workforce of delivery drivers would remain classified as independent contractors. According to its website, DoorDash says its dashers are earning more money and working flexibly under California’s Prop 22. Soon after Prop 22 went into effect, it states that “We are sharing early results of just what this new model has delivered to over 200,000 Dashers across California who have gained new benefits and protections, while maintaining their independence and freedom... On average, Dashers in cities across California earned over 30% more in January 2021 than they did in a typical month in 2020, showing a real increase in earnings since Prop 22 was implemented.”


As of January 1, 2022, California’s Assembly Bill AB286 (signed into law in early October by Gov. Gavin Newsom) will give tip protections to DoorDash delivery workers—and other food-delivery apps such as Uber Eats and Grubhub --and require more transparency. Bill AB286 is also good news for customers as it also prohibits food-delivery apps from charging customers more than restaurants do. It also addresses transparency issues: companies will not longer charge hidden fees; instead they must disclose to both restaurants and customers a detailed cost breakdown of each transaction.

“Gig companies have profited during the pandemic by keeping consumers and restaurants in the dark about the true cost of their services,” Assemblywoman Lorena Gonzalez, D-San Diego, who wrote the bill, said in a statement. “Now, small restaurants and their customers will know what they’re being charged upfront and get to see exactly how much is actually benefiting the restaurant.”


On its website DoorDash says its delivery workers keep all their tips, ditto for Uber Eats and Grubhub. DoorDash originally said it had no comment on the signing of AB 286, but later said it "already provides transparency" throughout its platform to customers, merchants and delivery workers. The company also said that "Dashers always receive 100% of their tips and see the full breakdown of all of their deliveries in the app”, reported Dow Jones Newswires. DoorDash also said it did not admit any wrongdoing as part of the settlement and is not acknowledging that a judge could have found the company to be an employer. A company statement said the settlement was “a fair compromise.”