Will Supremes clip the wings of California labor law? 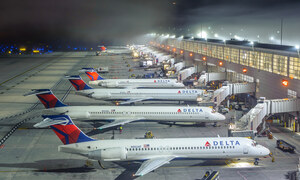 Oman is not the only lawsuit to challenge the airlines’ position that airline workers should not be subject to state wage and hour laws because they are employed in interstate commerce. Virgin America took a similar stance in Bernstein v. Virgin America. So did United Airlines in Ward v. United Airlines. All of the airline defendants lost in the Ninth Circuit. In August, Virgin America also filed  a petition for certiorari to the Supreme Court.

Shaking off the wage and hour requirements of the California Labor Code appears to be a top priority for the airline industry. The overall strategy is to mount multiple challenges to the application of California labor law, which is generally viewed as more protective of employee rights than federal law.


The language of the Oman petition gets heated, (at least for Supreme Court language):

“California wage-and-hour law is notorious for the detail in which it regulates matters left unaddressed by the federal Fair Labor Standards Act (FLSA) and other state laws. (Citations omitted) It is equally notorious for its potential to generate class litigation and outsized liability via California’s Private Attorneys General Act, or PAGA.”

“Notorious”– that passes for playground name calling in legal circles. The petition further characterizes the Ninth Circuit’s decision as “deeply flawed,” “profoundly disruptive,” and “a regulatory grab”. It names the employers’ familiar bogeymen of class action and PAGA lawsuits.

The Ninth Circuit’s opinion in Oman

Delta’s argument is that California’s wage and hour laws impose such an undue burden and, as a consequence, only federal laws should apply. That could work to employees’ disadvantage. A ruling that California wage law does not govern airline employees could prove troublesome for workers in the future with respect to other sections of the California Labor Code. It would be reasonable to anticipate that other employers in interstate transportation would also want to apply the same principal to their employees.

The Ninth Circuit’s decision in Bernstein


In Bernstein, the Ninth Circuit held that California labor law applied to California-based flight attendants and that the Federal Aviation Act preempted state wage and hour requirements only to the extent that those state laws affect matters of safety. Virgin America had taken the position that federal law preempted state law because, as in Oman, applying state law would have imposed an undue burden on the airline.

More CALIFORNIA LABOR LAW News
It should be noted that Delta’s petition lays out only an outline of the argument that will follow if the Supreme Court chooses to hear the case. It treads familiar territory, arguing that the burden that Delta will face if it is required to comply with multiple states’ wage and hour laws would be crippling, especially in the case of a flight that crosses many state borders.

Tellingly, the petition focuses on the question of where the airline workers perform their duties, which in the case of a cross-country flight, could include many states. Oman and Bernstein, however, seem to focus on the location where the employees are based. If the Court decides to hear the case, it may be critical to determine what a “home base” is. Is it, as Delta characterizes it, “where the employee wakes up in the morning,” or does it imply some more substantial connection?