Lisa D. put up with verbal abuse and harassment from her manager for two years. The situation got so out of control that she it now on disability. "I was making $16 per hour and I'm not sure yet what percentage I will get on disability," says Lisa, "but I'll be able to pull through this, as long as I am secure in knowing I have a job to go back to." Although verbal abuse can be intolerable, Lisa suffered slander and personal injury. The California labor law protects employees and its laws are intended to guarantee their basic rights and comfort.

"My husband and I started working for this small, family-owned and operated company two years ago," says Lisa (not her real name). "I brought clients from my previous job and everything was going well in the beginning—mainly because the manager—the owner's wife--was away. In fact we increased their revenue by about 50 percent. At first we were hired as employees on salary but when she returned to work, the manager didn't like the fact that I was paid when I had to take a day off so I was put on an hourly rate and my husband worked strictly on commission. 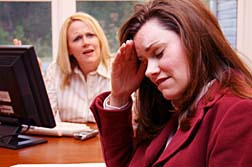 Everything changed when she came back to work. None of the work we had done was up to her expectations; she was extremely critical. The manager was constantly remarking that 'nobody knows how to do their job', including her own kids. (Their two children worked there, the son's girlfriend and another close family friend of theirs—it was pretty tight-knit.) Basically, she is very mean and needs a lesson in people skills and anger management. Verbal abuse was rampant: she accused me of making costly mistakes that were actually made by her family members and herself, and she would belittle me in front of everyone.

I should also mention that I am under my doctor's care and taking medication—a form of chemotherapy. I told the owner about this before I was hired so they knew exactly what I would be going through and I have to be very careful that I don't get stressed out. The meds cause a lot of frustration because I constantly feel sick, like I have the flu. As you can imagine, being subjected to a negative environment such as this compromises my health.

I have walked out of the office on several occasions when she has been on a rampage. The other day she accused me of adding extra time onto my time card. For the last few weeks she has been writing my time in and out—this is also very belittling. And yesterday she told me that my client said I was the reason that our sales were dropping. So I phoned the client and he said that was completely untrue and they were false allegations. So now, she has slandered my name.

More News
When I first came into the company I did everything—data entry, phone work, billings. I'm the first to admit that I made a few mistakes during the first six months but they brought extra staff in to help my workload. But the manager still harps on about those mistakes that were made more than a year ago. I'm tired of being the fall girl and being harassed.

My doctor is signing a medical report today. The owner (her husband) even suggested that I go on disability; he was stuck between a rock and a hard place, but at least he is staying neutral, which I appreciate. I filled out a complaint form on your site because I want to be able to keep my job—disability is my last resort and not something I expected to be on. But the owner said that his wife and I cannot work together so I should take disability for six months.

He told me that, after six months, I can come back to work. That remains to be seen. And maybe she will have taken an anger management course in that time so I won't have to put up with any more abuse when I return to work."

Posted by
david
on June 12, 2012
well im a marine who messed up by wearing his camys out in town and got a hair cut. i was on duty and my wife wanted to take me out for lunch so she could also get some baked goods for a friend whos getting out of the military. well we went out in san clemente CA and i knew i couldnt get out my car unless it was a emergency and when we got to are distanation i seen their was a barber shop and decided that tomoros monday i need a haircut and i took the risk and went and got a hair cut while my wife got the food. in the end of my haircut many service members were coming in and were up set of my actions i was really aware at this point and tryed to get out of there back to my pov before i got their i was stopped by 2 staff ncos and a sgt they addressed the sititation and surrounded me they at first just asked what was i thinking i said i know im wrong and ill gladly leave now they asked what unit i was with so i told them they took my normal tone of voice as disrespect and began blasting me verbally in front of everyone including my wife taken i didnt know who these gentlmen were until i told them they were getting to close and i was leaveing after i gave them my info. they surrounded me as i tried to get my wife and began demanding me yelling at me to get in postion of parade rest while talking to these ncos and embarresed me in front of my wife so i told them NO idk you so im getting my wife and leaveing they began yelling at me and my wife while she was in a resturant ordering to go so i have plenty of witnesses that seen it happen they took pictures of me and my wife without my concent and completely terrified my wife and me i felt scared and verbally abused.