On November 21, Casey Denning and Natalia Cole filed a lawsuit on behalf of themselves and similarly situated cannabis workers alleging that harvesting company Loud Buddha LLC and Pura Cali Management Corp, a cultivation contractor hired by Loud Buddha, violated provisions of the Fair Labor Standards Act and the California labor code. The Complaint claims that the employers forced them to work long hours in oppressive conditions without providing overtime pay, meal breaks, or accurate wage statements. 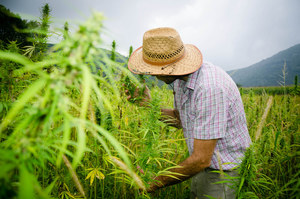 
Workers’ duties included cultivating, harvesting, bucking (removing buds and stems) and hanging marijuana plants, then placing them in large commercial freezers to be hauled away. More than 50 workers performed these chores to produce multiple tons of cannabis per year from Pura Cali’s marijuana farm, according plaintiffs.

The 11-count Complaint alleges that Loud Buddha and Pura Cali: The abusive, even dangerous, conditions endured by these “trimmigrants” – young, often undocumented workers who find seasonal work in Northern California’s Emerald Triangle has been chronicled for years. Tales of murder, sexual assault and “disappearances” are chillingly common.

“The combination of marijuana and close quarters has occasionally burst into violence. Seven trimmers were charged with taking part in the brutal murder and robbery of a Mendocino cannabis farmer in 2016. In June [2018], a New Hampshire man was found guilty of beating a fellow itinerant laborer to death at a Covelo marijuana farm after a disagreement about the victim’s dog.”

What is new is a decision by the Tenth Circuit in Kenney v. Helix TCS , which makes it clear that a business maintained in violation of the Controlled Substances Act (whatever its status under state law) must comply with the provisions of the FLSA.


In Kenney, a former employee of Helix, which provided security services for businesses in Colorado’s state-sanctioned marijuana industry, filed a lawsuit against the company claiming that Helix had misclassified him and similarly situated workers as exempt from the FLSA’s overtime obligations. Helix argued that his employment was in violation of the CSA and thus not entitled to FLSA protections.

The Tenth Circuit concluded that “case law is clear that employers are not excused from complying with federal laws” because of their other federal violations. Without drawing conclusions about the merits of Kenney’s FLSA claims, the court held only that Kenney and similarly situated individuals were not categorically excluded from FLSA protections.


The legal cannabis industry has matured considerably since the first early efforts at decriminalization and the subsequent legalization of medical and then adult recreational use. But while protections for consumers have moved ahead, protections for workers have lagged behind.

Enforcement of the provisions of the FLSA relating to minimum wage, overtime, and recordkeeping seems like a pretty tame place to start. This may open the door, however, to enforcement of other laws, like those requiring employers to maintain safe work places. Title VII’s prohibition of discrimination on the basis of characteristics like race, sex and national origin could follow along.

Enforcement of these minimum guarantees would do a great deal to protect the safety and economic welfare of workers in what was once a notoriously unregulated industry. But there are areas where Denning v. Loud Buddha, LLC may venture into territory not explored by the Tenth Circuit.

More CALIFORNIA LABOR LAW News
Kenney, of course, does not deal with the complex interrelationship of the FLSA and provisions of California labor law, including the wage orders that regulate certain sectors of the labor market. California law, at least in general terms, is more generous than federal law on issues of minimum wage and overtime. Both bodies of law, however, have exceptions for certain agricultural workers, which did not apply in Kenney, but might become an issue in Denning.

In addition, California’s protections for workers who have medical recommendations for the use of cannabis or cannabis derivatives or “ban-the-box” prohibitions on pre-hire inquiries into previous criminal convictions might rise again to public attention.

Much work remains to be done to protect those who work in the legal cannabis industry. There are also practical problems involved in representing itinerant, undocumented workers, especially those who may have moved on years ago. Nonetheless, enforcement of FLSA protections is a step in the right direction.