A California woman has filed a lawsuit for California labor law violations against her manager because he allegedly impersonated President Donald Trump, made racist comments at work and gave her a purse emblazoned with the Confederate flag for Christmas. 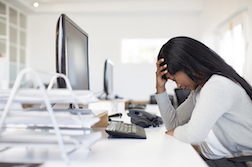 In her lawsuit, Wright claims that Kenneth Hayden dressed as and impersonated President Trump, decorating the office with Confederate flags proclaiming, "The Southland Shall Rise Again." His wife Anita threw in her own impersonation, dressed as a grinning Trump supporter sporting a Confederate flag handbag.

Wright, who is black, worked as a project administrator for Southland Construction from 2015 to 2017. She alleges in her lawsuit that Hayden and his wife made racist comments about other employees of different ethnicities and frequently quipped the phrase, "We'll just make the Mexicans do it" in the presence of Hispanic employees.

Wright also alleges that the chief estimator at Southland Construction Management told an intern from India who identified as a Sikh to "go get your people before they blow something up."

The lawsuit claims that two weeks after Wright filed a gender discrimination complaint, she attended the annual company Christmas party where workers gathered for the employee gift exchange. Kenneth Hayden allegedly handed Wright her gift, which she later opened once she returned to her car.

According to the lawsuit, plaintiff was "horrified" by what she unwrapped.

More CALIFORNIA LABOR LAW News
"Out of the Christmas packaging, she unearthed a chain link purse bearing the Confederate flag in red, white and blue rhinestones. As the symbolism dawned on her, plaintiff became sick to her stomach and felt utter shock, " according to the complaint.

Inside the purse, Wright allegedly found several photos of Kenneth and Anita Hayden posing before a Confederate flag, which bore the all-caps message "THE SOUTHLAND SHALL RISE AGAIN."

According to the lawsuit, Kenneth and Anita Hayden fired Wright three months later after she complained about the hostile work environment.

"No one should be treated this way in America in the year 2017," said Wright in a news release reported by the East Bay Times. "This is not Alabama in the 1940s. This country is going backwards, and it has to stop."