On December 23, the Superior Court of California, Merced County ordered Foster Poultry Farms, a chicken processing plant, to  comply with federal and California workplace safety protocols at its Livingston facility. The California labor lawsuit, brought by the United Farm Workers and two workers at the plant, details a persistent pattern of reckless disregard for worker safety that had continued even after Merced County shut the plant down as a “public nuisance,” the infection rate in the county spiked and workers died. 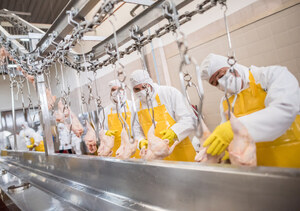 This time around, however, the enforcement of safety protocols will have the threat of further legal action behind it. On January 29, Foster Farms will appear in court again to show why the temporary court order should not be permanent while the underlying lawsuit winds its way through the court system.


The Temporary Restraining Order, which went into effect on December 28, requires Foster Farms to take 20 specific steps to protect workers. These include: In themselves, none of these requirements are particularly startling, except perhaps for their obviousness. For its part, Foster Farms claims that it tests all employees twice a week and, at the time of the December hearing, had a positivity rate of less than 1 percent.


The Livingston plant saw its second COVID-19 outbreak in early December when at least 48 employees tested positive. The plant had been shut down for six days in September after 392 workers tested positive and nine died. The conditions under which the plant was permitted to re-open after that closure are very similar to the requirements of the current TRO. In their Complaint, the UFW alleges that Foster Farms has been unwilling or unable to comply with federal and state guidelines. In “naked disregard” for workers’ health and safety, plant management: For example, plant workers known as “live hangers,” catch individual chickens and attach each one upside down on hooks hung above the workers that then carry the chickens to the killing room. Live hangers stand two feet or less from one another. There is no plexiglass or other divider between them. Workers who pack vacuum-sealed birds in boxes for shipping work side-by-side, similarly less than two feet apart with no dividers between them.

Workers in Rotisserie section provide their own masks at their own cost and there is no consistency as to type; some are cloth, some are paper. Foremen in the live hanger area discourage workers from asking for replacement masks. There is frequent congestion around certain areas where workers congregate, including around the time clock and around bathrooms at breaks.

More CALIFORNIA LABOR LAW News
As a rule, courts are reluctant to grant TROs, because they can be seen as a restriction of the defendant’s rights before the court has had the opportunity to consider the merits of case. Under California law, a temporary restraining order may be issued, based on a declaration that, to the satisfaction of the court, shows reasonable proof of harassment of the petitioner by the respondent, and that great or irreparable harm would result to the petitioner.

The evidence cited in the Complaint is anecdotal, but it is plentiful and concerns a deadly, contagious disease. The court found that the plaintiffs had “set forth sufficient evidence for the court to be concerned that perhaps Foster Farms is not complying, or is unable to comply, or unwilling to comply or turning a blind eye" to the mandates under which it, like many other businesses, must operate in a time of crisis.