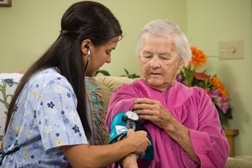 The 2015 lawsuit, filed in San Bernardino County Superior Court, included class claims that were dismissed and non-PAGA individual claims that were sent to arbitration. Plaintiff Lourdes Lefevre’s PAGA claim was the only lawsuit remaining to be settled. Lefevre, a former personal care provider at the nursing home, claimed that Five Star had violated California labor laws since about 2011, including:


In her 2015 complaint, Lefevre stated that Five Star Quality Care forged her signature that requires employees to waive their statutory rights if they don't meet a series of grievance deadlines before arbitration – another violation of the California labor code.

Five Star argued the agreement is valid and enforceable under federal, California and Maryland law – where the company is headquartered. And a human resources manager from the company claimed that Lefevre signed the agreement a few days before she started work at Five Star. Lefevre claimed she never received any paperwork until after she began work.

More CALIFORNIA LABOR LAW News
Lefevre sought unpaid overtime wages, one hour of pay for each workday where a mealtime or rest period wasn't provided, disgorgement of wages and expenses that were improperly deducted and other injunctive relief and damages, according to Law360.

Over $500,000 of the PAGA claim will go to aggrieved employees and the remaining amount will go to attorney fees and civil penalties with more than $1.5 million allocated to the California Labor and Workforce Development Agency. The settlement  is Lourdes Lefevre et al. v. Five Star Quality Care Inc. et al., case number 5:15-cv-01305 in the U.S. District Court for the Central District of California.