Another Hero Pay wage hike, this time local government-mandated pay, requires that grocery companies with over 300 employees increase California hourly wages an extra $4 per hour. The salary boost is meant to compensate grocery store workers for the dangers they face during the coronavirus pandemic. However, it seems to have backfired: Some grocery stores have closed, leaving hundreds of frontline grocery workers with zero wages. 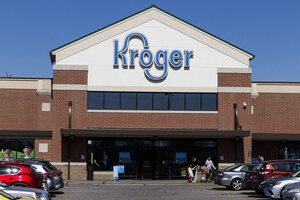 As well, the Los Angeles City Council has approved an emergency ordinance requiring grocery and pharmacy retailers with 300 or more employees nationally and 10 or more employees on site to add a $5 hazard pay to all hourly, non-managerial employees' wages for 120 days.


In response to the mandate, Kroger closed two of its stores in Long Beach -- a Ralphs location and a Food4Less store. "As a result of the City of Long Beach’s decision to pass an ordinance mandating Extra Pay for grocery workers, we have made the difficult decision to permanently close long-struggling store locations in Long Beach," said a Kroger company spokesperson. "This misguided action by the Long Beach City Council oversteps the traditional bargaining process and applies to some, but not all, grocery workers in the city,” according to local news outlet Fox 11.

Long Beach Mayor Robert Garcia, lead on this pay increase mandate, said grocery stores are “just being selfish by closing down rather than paying their workers more.” And The United Food and Commercial Workers union calls Kroger's decision an attack on workers.

In March 2020 a temporary pay increase to grocery workers added at least $2 per hour to grocery worker paychecks – workers who are “taking on additional health risks, suffering additional stresses, and must work in more difficult environments,” reported Forbes. The increased compensation was phased out during the summer of 2020.


The California Grocers Association (CGA) on February 3 filed a federal lawsuit against the city of Montebello, challenging its ordinance requiring a $4 "hero pay'' salary boost for some workers during the pandemic.

The CGA claims that the ordinance is illegal because, by singling out certain grocers and ignoring other groups that employ essential frontline workers, it violates the constitutional requirement that similarly situated people must be treated alike. As well, the CGA alleges that the ordinance is preempted by the federal National Labor Relations Act, which protects the integrity of the collective-bargaining process.

Ron Fong, president and CEO of the Association, argued that the wage hike is to too big a cost increase for any grocery retailer to absorb without consequence.  He says grocery stores have three options: The latter was the option for some grocery store chains. Kroger will permanently close two of its Long Beach grocery stores April 17 and nearly 200 employees will be out of work. Kroger operates more than 300 grocery stores in California.

But the United Food and Commercial Workers union interpret Fong’s decision as a direct attack on grocery store workers and accused the grocery stores of retaliation. It also said the Food4Less store that Kroger closed saw sales hike 29 percent from 2019, and Kroger, which is the largest grocery chain in the country, earned twice as much in 2020 as it did in 2019. According to CNN Business, the pandemic saw consumers hoarding groceries and household staples, driving up sales at top chains like Walmart, Costco and Kroger.

Amid the fallout of the COVID-19 crisis, grocery stores enjoyed a sales boom. Womply.com reported that  starting in March 2020, when things got more serious in the U.S., sales skyrocketed upwards of 30 percent nearly every day. “California has been consistently high sales at local grocery stores with spikes corresponding to big COVID-19 news milestones.” But sales are dropping.


The CGA lawsuit also alleges that in voting to approve the ordinances, councils in Long Beach and Montebello have ignored low profit margins, and significant operational costs grocers have incurred in response to the pandemic, including the hiring of tens of thousands of additional workers.

More CALIFORNIA LABOR LAW News
Minimum wage in Long Beach is $14 per hour for employers with 26 or more employees. According to Zip Recruiter, the average Los Angeles grocery store worker's salary was $36,423 or roughly $18 per hour assuming a work year of 2,000 hours. The $4 per hour pay boost would increase the average salary from $18 per hour to $22 – a 22% increase.

Grocery store labor costs equal 9.4 percent of total sales. According to Workforce.com, grocery stores must spend $9.40 paying their workers to generate $100 in sales. After dishing out their costs—buying groceries, paying utilities and necessary equipment to run the store, the average profit is about 2.2 percent. In other words, for every $100 in grocery sales, the store earns $2.20.

With government-mandated hero pay proposals, that 22 percent increase in costs that accounts for 9.4 percent of expenses ends up increasing total expenses to 2.1 percent, which pretty much equals their entire profit.

Bottom Line:  Does a wage hike make grocery workers safer? Maybe they should be at the front of the vaccine line.