Often, when laws like the California labor code are broken by companies or individuals, state and federal regulators step in to fine such groups and make them compensate anyone adversely affected. 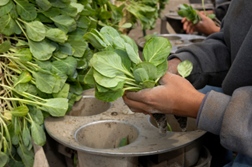 According to a recent release from the US Department of Labor, the federal agency did just that recently, fining two farm labor contractors in California more than $91,000 for wage and transportation violations.

The release said that the fines represented the maximum penalties against Madera contractor Mid-Valley Labor Services and Riverdale-based Ayala Corp. More than half of the money the companies are required to pay represents back wages that are owed to farm workers, according to the release.

The Labor Department's Wage and Hour Division reportedly opened investigations into the contractors after two traffic accidents in 2010 that led to the death of six migrant workers and severely injured six others. The workers were reportedly being transported unsafely.

"The Labor Department is applying the maximum penalties allowed by law because these tragedies could have been prevented had the law been followed," George Friday Jr., administrator of the western region of the Wage and Hour Division, said in the release. "It is imperative that employers, farm labor contractors and others provide safe means of transportation for agricultural workers and use properly licensed drivers."

Some of the allegations leveled against the farm contractors by the federal agency included illegally charging workers transportation costs, failing to provide vehicle insurance and failing to pay employees for work they performed in the fields before their shift began, according to the release.

More CALIFORNIA LABOR LAW News
In addition to the fines ordered against the farm contractors, 12 California hospitals were also recently fined by the state's Department of Public Health after it was discovered that mistakes made at the facilities resulted in the deaths of three patients and put others at risk.

According to The Associated Press, the mistakes are alleged to have taken place between 2008 and 2010, and generally involve medication errors or accidentally leaving medical equipment inside patients following surgeries.

The Department of Health reportedly fined the hospitals a total of $650,000 and helped them to make changes to ensure that such mistakes do not occur in the future, Pam Dickfoss, acting deputy director of the department's Center for Health Care Quality, told the news source.

"They were all serious infractions that do affect patient safety," Dickfoss said. "The hospitals took them very serious[ly] and took effective action."