California's attorney general has taken the lead in supporting Washington State’s decision to enforce minimum wage laws, which includes GEO, a private prison company that, since at least 2005, has paid thousands of detainee workers $1 per day for labor that is necessary to keep its facility operational. The private prison company has appealed a Washington district court ruling that it owes back pay to detainees. 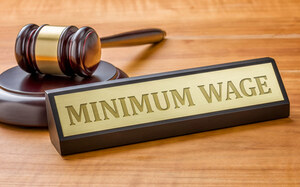 GEO owns and operates Northwest Detention Center, the second-largest private prison and detention corporation in the U.S. It also contracts with Immigration and Customs Enforcement ("ICE") to provide detention facilities and run their day-to-day operations. Seventy-four percent of immigrants in ICE custody are held in facilities operated by private prison companies, including GEO. With the capacity to house up to 1,575 immigrant detainees, GEO’s Northwest ICE Processing Center is the fourth-largest immigration detention center in the country.

Late last year, a Washington district court ruled that GEO owed detainees at Tacoma, Washington's Northwest ICE Processing Center $17.3 million in back pay and $5.9 million in damages. According to Law360, the detainees were paid far below Washington's minimum wage to work at the facility. They were paid $1 per day to launder clothes, cook and serve food and clean the entire facility except for areas where detainees are barred from entering. (The 2022 Minimum Wage in the state of Washington is $14.49 per hour.)

GEO appealed that ruling. It argued that federal lawmakers govern immigration services, not state lawmakers, and Congress had previously determined that detained immigrants do not have to be paid above $1 a day for their work. It also argued that the company benefits from derivative sovereign immunity as a federal contractor: In other words, it does not have to comply with the Washington Minimum Wage Act.

California's Attorney General Rob Bonta leads a group of 15 states backing Washington state's response to GEO’s appeal. In an amicus brief issued at the end of May, the group said that the Ninth Circuit should apply minimum wage laws equally. "State minimum wage statutes not only safeguard the health, safety, and welfare of workers themselves, but also improve the public health and welfare and foster fair competition among businesses,” the states said in a news release. Bonta said, "Doing business with the federal government isn't a green light to shirk generally applicable labor protections…"Minimum wage laws protect the dignity of work and the financial security of working people across the nation."

This lawsuit challenged the legality of the Voluntary Work Program, which was developed by U.S. Immigration and Customs Enforcement and implemented by GEO Group Inc. and CoreCivic Inc., another private prison contractor. Under the program, the prisons pay detainees $1 a day (or less – see below) for doing laundry, cleaning, and preparing food. The case is State of Washington v. The Geo Group Inc., case number 21-36025, in the U.S. Court of Appeals for the Ninth Circuit.


Florida-based GEO has been in partnership with ICE since the 1980s. In 2015, GEO projected the Tacoma detention center would bring in $57 million in revenue every year at full capacity. ICE renewed GEO's contract for the facility through 2025.
On its website, GEO Group says it is “committed to providing leading, evidence-based rehabilitation programs to individuals while in-custody and post-release into the community through the GEO Continuum of Care”. In reality, the private prison contractor has been likened to a plantation owner exploiting slave labor. According to the Business & Human Rights Resource Centre, GEO Group has been accused of relying on cheap and unpaid labor by detained immigrants and is facing several lawsuits alleging that “voluntary” work programs at their facilities violate state minimum-wage laws. Several people currently or formerly living in detention have alleged that they were threatened if they didn't work and worried they could not afford basic commissary items without performing labor for GEO.”

GEO responded: The US "federal government sets the performance-based national detention standards which govern the Voluntary Work Program at all ICE Processing Centers" and "any allegation that individuals, in ICE Processing Centers, are retaliated against or have to volunteer to work in order to have access to, or pay for, basic hygiene products or food is completely baseless and demonstrably false."


GEO has faced numerous lawsuits, including a class action suit by current and former detainees at a Colorado facility alleging forced labor. Washington’s case was tried together with a class action suit of former detainees at the Tacoma facility. Judge Robert J. Bryan of the U.S. District Court for the Western District of Washington presided over the case:

The Business & Human Rights Resource Centre reported that detainees who fled Cameroon in 2017 brought a wage theft class action against CoreCivic’s Cibola county correctional center in New Mexico. Both CoreCivic and Geo Group have said the pay -- $0.50 or less per hour-- is compliant with a voluntary work program mandated by the government, but attorneys said the labor is not voluntary because it is needed to pay for items such as toothpaste or to make phone calls to loved ones...The New Mexico case was filed in a federal court in Maryland.