Many employees are unaware that they are owed overtime compensation, or they don't know where to get help. Wage and hour attorney, Kim Anglin discusses overtime issues in the food distribution industry.

"Route sales representatives are often misclassified as outside salespersons exempt from overtime wages by their employers," says Anglin. "Many employees are being deprived of their hard earned overtime wages by employers who convince employees that they are sales people exempt from overtime pay when in reality they are glorified food stockers and inventory checkers who should be getting additional overtime pay. While some route representatives may be able to make a few sales of product here and there, these sales do not qualify for the outside salesperson exemption. 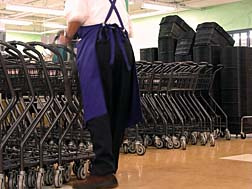 In today's marketplace, each major chain grocery store has a pre-determined amount of space dedicated to certain food items and to a particular vendor. This makes sense from an efficiency point of view. The stores want vendors to get into the stores, stock their shelf or freezer space and to leave the store with well organized and good looking display space that will be pleasing to the store's customers. Customers in turn want to know that they can be efficient in their shopping time and know that the food items they desire will be available to them when they go to the store. They want the store selection to be consistent and they want to know where to find the item within the store.

Some food distribution companies have attempted to avoid paying their employees overtime and often fail to provide them with meal and rest breaks despite long hours going from store to store monitoring product placement and inventory of product.

Many food distributors to major grocery outlets hire employees who are often titled as customer service representatives or territory managers or other similar titles. These employees are generally supposed to use their own vehicles to travel their route of grocery stores. Once at the grocery stores they generally check the stock and display space and transmit back to the company any needed inventory. They will also communicate with the manager of the department if possible or needed. The job is challenging and often requires long hours of driving, stocking shelves and reporting to the company and reviewing communications with their employer. They also often coordinate with the drivers who drop off stock to the grocery store warehouse and with merchandisers -- hourly employees who help the employee to maintain product levels on the shelves. In other words, they stock shelves and rotate stock: the old pizzas on the top and the newer product placed on the bottom of the freezer.

The problem that many of these customer service route representatives have is that they are often wrongly classified as exempt from overtime pay. They are told by their employer that they are salespersons who are not entitled to overtime pay. Sometimes they are even paid by what is called "commission" which turns out to be nothing more than so many cents per item stocked and sold from the store.

Many of these employees are told over and over that they are salespersons and that they should try to talk to the department managers to gather more space. While there may be a few slots that can be garnered by a "salesperson", the overriding job is merely stocking shelves and taking inventory. These salespersons are doing a minuscule amount of sales. There sales opportunities are limited because the entire layout and stocking preferences of the major grocery chains are dictated by the grocery stores themselves. There are pre-negotiations for space and product by employees whose jobs are dedicated to high level negotiations for space and product placement. The customer sales representative has only a minuscule opportunity to sell anything.

Many employers misclassify their employees as sales persons and wrongfully deny them overtime for a number of reasons:

1. To avoid paying employees overtime pay.
2. To obtain free labor since the employee must keep working until the job is done even if it means working 10 to 16 hours a day and coming in for a sixth day of work.
3. To obtain an advantage in the marketplace since the employer can keep labor costs low and their product price low. This strategy allows the food distributor to outsell the competition who is following the proper wage and hour laws.
4. These same employers often fail to give mandated breaks and lunch periods.

To date, despite the fact that overtime should be paid to employees who are not true salespersons under California State law, many food distribution companies continue to call their employees salespersons and to avoid paying overtime to them. Often, the employer even goes one step further and deducts spoilage or breakage from the employees check or may deduct some of the merchandiser's paycheck from the alleged salesperson's check. These are egregious examples of companies passing on their costs of doing business to their employees.

In California very few employees are not entitled to overtime. The exemptions to payment of overtime are quite narrow. If a person is titled as an outside salesperson in order to be classified as exempt then they must be actually selling product, not just doing stocking and inventory. A minor amount of sales does not constitute an exemption from overtime law. The law provides that you must look at the actual duties of the person and not just their title. Otherwise any person in the distribution system could be called a salesperson and denied their rightful overtime.

When analyzing a situation, the facts of the person's day to day activities are very important. The facts are what will determine whether they are exempt or not. In fact, in 1999, the California Supreme Court issued an opinion concerning the outside salesperson exemption which was a watershed moment in California Wage and Hour law. The case involved Peter Ramirez who worked for Yosemite Water Company. Ramirez' job involved delivering water to mostly residential customers. His employer, Yosemite Water Co. classified him as exempt under the outside salesperson exemption to overtime.

The Supreme Court held that under California Wage Order No. 7-80, which defines "outside salesperson" as any person ". . . 18 years of age or over, who customarily and regularly works more than half the working time away from the employer's place of business selling tangible or intangible items or obtaining orders or contracts for products, services or use of facilities," created a purely quantitative test for exempt status. The court said that the wage order focused solely on whether the employee "works more than half [of his or her]...working time...selling . . . or obtaining orders or contracts." Ramirez v. Yosemite Water Co., Inc., 20 Cal.4th 785, 797 (1999). Under this test the Court requires that the route representative actually spend over 50 percent of his or her time involved in sales work as opposed to non-sales work such as stocking shelves or doing the same job as those who are entitled to overtime.

Based on the holding of the Supreme Court, employers can no longer claim that a route person is a salesperson if less than 50 percent of their duties actually involve sales activity. Selling a few extra bottles of water to an occasional customer does not qualify an employer to misclassify an employee as an outside salesperson. They simply do not meet the required standards for classification as exempt. Employers must look at the employees' real duties and the time spent on a daily basis rather than at titles or hopes for what an employee might be.

In the food distribution context, most route salespersons or customer service representatives are not actually selling or involved in sales activities to the extent required to meet exempt status. There are many people involved in the food distribution industry who have not been paid their hard earned overtime because of wrongful misclassification of employees as outside salespersons. Although many food distributors have changed their compensation plans, there are still many companies out there who ignore the law and continue to take advantage of the situation and their employees.

Presently, I represent employees in a case filed against Schwan's Consumer Brands North America. Schwan's is a major frozen food distributor in the United States and Europe. They distribute many well known brands such as Red Baron Pizza and Freschetta Pizza. The complaint alleges that Schwan's failed to pay overtime to their customer sales representatives and failed to provide meal and rest breaks. These employees have worked many overtime hours without payment of overtime pay. Schwan's claims that these employees are exempt from overtime. This case will be determined based upon the actual duties as performed on a daily basis by these employees. In this case it is clear that they should not be classified as exempt outside salespersons."

More News
Ms. Anglin represents employees in wage and hour cases. Her law firm, the Anglin Law Group, provides counsel to employees who have been denied their rightful earnings, including overtime pay, waiting time penalties, reimbursements for necessary expenses paid on behalf of an employer as well providing counsel to employees who have been denied meal and rest breaks. Ms. Anglin received her Juris Doctorate from the American University, Washington College of Law in Washington, D.C. in 1999 and also studied law at Oxford University in England and the University of Paris, Pantheon-Sorbonne in France. She attained her undergraduate degree from the University of California, Davis in 1995. Ms. Anglin has received numerous academic awards including the Vivian Bryan Nelson Scholarship from the University of California, Davis.

Posted by
Julian Bourgosian
on September 12, 2013
I can't find a date on this article. I'm hoping Schwan Foods is exposed for what it is: a totally exploitive enterprise and one of the worst companies in America.

Not only do they not pay overtime, but they pay a per diem rather than hourly. I didn't see that mentioned in this article. The hiring supervisor I interviewed w/said that there's a $50/day (12+ hours) per diem for showing up and $50 more per diem if you "meet ALL your metrics" i.e., are perfect. That works out to between $4 and $8 an hour!! Well, $8 and hour isn't a living wage even tho it's legal but $4 an hour? And this is NOT A SALES POSITION. I can't figure out how they get anyone to work for them. They should be fined up the ass for their sick business practices. They also give a "personality test" probably to see if a person is weak and vulnerable to domination and exploitation. Needless to say I didn't take the job.