When people think of California labor law, they probably typically think about laws that protect an employee's wages, limit the number of hours worked, and prevent harassment and discrimination. However, there are laws that protect other areas of employment. These laws are often overlooked and in many cases unknown by employees. For example, California labor law protects employees who earn tips during the course of their employment. 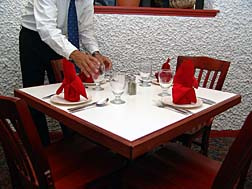 Tipping occurs when a customer leaves money for an employee as a thank you for goods sold or services given. Tip pooling occurs when an employer requires employees to combine all their tips and split the money among the employees. Under California law, tip pools are allowed when the tips are shared with employees who provide direct services that result in a tip. In a restaurant this would include hosts, servers, busboys and anyone else who provides direct table service. Chefs are only included in tip pooling in restaurants where the chef prepares the meals at the customer's table.

What many employees do not know is that tips belong to the employee, not the employer. This means that supervisors cannot share in tip pools. Essentially, tips can only be share with employees who do not have the authority to hire or fire employees or to supervise or direct the actions of other employees. Furthermore, employers cannot deduct money from wages because of earned tips, nor can tips be used to compensate business owners.

Any tips that are made on a credit card must be paid to the employee by the next regular payday that follows the date the credit card payment was authorized. Employers must give their employees the full amount of a tip given on a credit card and may not deduct any credit card processing fees from the tip.

More News
Tips are currently not considered part of a regular pay rate in California. In this way, California law differs from federal law in how tips are viewed. Under California law, "an employer cannot use an employee's tips as a credit towards its obligation to pay the minimum wage." Therefore, tips that are collected are over and above the required minimum wage pay.

Posted by
koko
on December 22, 2013
I am a waitress. At my work, we pool tips among servers, busboys, Sushi chefs, and hostesses. And all divisions have maximum rate of the percentage. (Servers and Sushi chefs are 100%, Busboys are 40% and Hostess 20%)
Lately, My restaurant released new menu items, since Servers and sushi chefs are still not familiars with new menu items, the employer lower our tips rate as 75%. Is this regal in California?
Posted by
Brad Curell
on November 3, 2013
I work with the Freeway Service Patrol as a tow operator. We contract with O.C.T.A under a hourly rate thats paid to the contractor who pay's me a hourly rate...It is stated in our Standard operating procedure(sop) that we are not allowed to take tips because its against the law..The service is a tax funded program therefor, the service we offer is free to the motorist....Why would it be against the law to axcept a tip?
Posted by
Angela Hale
on October 29, 2013
I am a waitress and my co has a policy that we have to pay $25 for any missing guest checks. I have a customer that dined and dashed. Should I have to pay the $25 for his 16.00 ck?? Is it legal for them to charge me for their losses?
Posted by
Rita Rendon
on September 3, 2013
The owner of the restaurant that I work as a waitress , makes m tip 2. Busboys ,the kitchen and the dishwaher .is this legal?
Posted by
Deborah Wayne
on June 29, 2013
My employer takes the tip pool jar and keeps all the tips. His reasoning is he is going to keep the tips because mistakes were made during service. Is that legal?
Posted by
ccarmen garcia
on January 9, 2013
is there an amount,% that is aoutomaticlly set in a tip pool by law? or dose the owner,maneger of the resterant set a % they want?
Posted by
dustin heishman
on November 29, 2012
I have a friend that is a waitress in a Chinese restaurant and the owners make them pay 1.50 per table that they get to help compensate the bussers who are family and not on payroll. if they get 2.00 tip the only walk out with .50 if the get a 1.00 tip they have to pay .50. Is this right and if not then please let me know who I would need to conact?
Posted by
cathy myers
on January 31, 2012
I am a waitress. I go in on my scheduled days and am sent home after only being there for two hours. I don't want to go but they say im cut. Is that legal of do they have to pay me for four hours? Im in Califofnia