Since August of 2001, Jeana Cork worked as a nursing assistant for Riverside County. She worked in the mental health department and it was a tough job. "We are the emergency room for every kind of patient," says Cork. She got slammed against a wall by two male patients and suffered four ruptured discs. The County, on advice from their insurance company, fired Cork, who believes she was wrongfully terminated. However, the California Labor Law follows an "at-will" doctrine.

Under this doctrine, an employer is generally free to terminate or demote an at-will employee with or without just cause. But with just about any doctrine, there are exceptions to the rule. For instance, being fired or demoted due to discrimination or in retaliation for reporting safety complaints or illegal conduct by the employer constitutes wrongful termination. Cork doesn't fall into any of these categories. Does that mean she has no recourse? 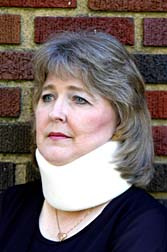 "I was injured on two separate occasions," says Cork. "I had some neck problems in the first one and went back to work after a few weeks About two years later I was involved in another altercation with patients. The male patients were fighting—there was a riot in the hospital. I got slammed and pinned against the wall.

"That was in May, 2005. I suffered four ruptured discs in my neck and had a pinched nerve. But the insurance company doctor concluded that I should go back to my regular job—even though I had an MRI that showed my injuries.

Before I had a chance to return to work, I got a letter of termination.

On several occasions I tried to get employment with the county; even though I wasn't able to go back to my regular job, I could perform other administration jobs. There has to be a job in all of Riverside that wouldn't require me to endanger myself. 'We have nothing for you,' they said.

I don't have any other skills besides nursing and I'm waiting for neck surgery so I am really at a loss. I have been nursing my whole life. I thought the county would at least have approved surgery for my neck; let me come back to work in a modified position. I think that is reasonable. I was terminated without just cause: when I phoned and asked why I was fired, they said, 'We don't need a reason; the insurance company told us to let you go.'

Luckily I had been paying into state disability insurance (SDI) from my other job—in home support services—where I worked for a few hours a day. But my main job was at Riverside County where I worked anywhere from 20-60 hours per week-- I was working per diem. But 18 months ago, my SDI ran out and I haven't been able to work or get any other means of support since.

I've never been fired in my life and I am completely devastated. I hadn't planned for something like this to happen; I didn't see it coming. There was no Plan B. I have been treated like a criminal, for getting hurt on the job. They terminated me and forced me to get an attorney. "

Jeana Cork would be happy to be reinstated to another department, not too much to ask.
And monetary compensation would help.

More News
The California Supreme Court has ruled that the "at will" presumption can be overcome by showing that the employee had a reasonable belief that they would not be fired without good cause. An implied contract generally involves showing a decent length of service to the company, showing that the company expected the employee to be around for a while (the provision of benefits is a common way of doing this), and showing the expectation that the employee would not be fired without good cause (most often this is outlined in an employee handbook under a policy of "progressive discipline" before firing).

Several state and federal agencies help solve employment problems and they are free. But they take a long time and recoveries are limited. An attorney might be able to help Cork with a breach of contract case. She had a contract; she worked for Riverside County.