CA labor law: From Insult to Injury and More

Not only was Kathy Niccolai sexually harassed at work, she was also injured on the job. When she came back to work, the man who harassed her had taken her job and she was fired! According to California Labor Law, both incidents violate the Fair Labor Standards Act.

Sexual harassment
"I started work at Goodwill Industries in 2002 and trained apprentices," says Niccolai. "For the last four months I was sexually harassed by a co-worker just about every day; he made rude comments in passing and tried to touch me—he hugged me and lip-locked and drooled all over me—it was disgusting. I worked in an empty office just before the end of my shift each night and he would barge in behind me and grab me. The only way I could get him to leave me alone was to say that someone was coming. 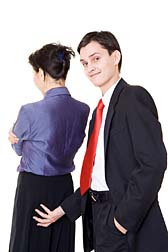 At the beginning of July, I complained verbally about his behavior to the director of operations. The next day, he came into my office, sat down next to me and apologized for his behavior and would never do it again but if I wanted to go out with him, to let him know. He was embarrassed.

A few days later, someone in management phoned and asked me to put this incident in writing—file a formal complaint. She told me that two other employees had complained about his behavior. I filed a complaint and left it at that.

Injury
"On July 10 I had an accident on the job. I picked up a heavy tote and my back went into a spasm. A co-worker helped me put on a back brace. Two hours later my boss showed up and said 'You look like you've been hit by a mac truck' and I told her about the accident. We continued working on production sheets, even though I was in pain. Then I went back to my office and wrote an incident report -we have to document everything that happens, especially injuries. I then walked over to my boss's office to ask if I could go home. 'My back hurts and I need to lie down,' I said. 'But we need to get these numbers,' she replied. I punched out at 4.20pm (rather than 6.30pm or 6.45 pm) and went home. We decided to finish the numbers the next day.

Next morning I couldn't get out of bed; it even hurt to breathe and I barely got to the bathroom. I called work and left a message saying I couldn't come in today.Then I called my co-worker and asked her to open the plant. I couldn't make it to the doctor because my back hurt so bad until Saturday, 4 days later. I went to ER and was prescribed a pain killer and told to rest until Monday and make a follow-up appointment with occupational health. I went to my appointment but my boss wouldn't authorize it - occupational health is affiliated with Goodwill.

More News
My boss called me two days later and asked me to come in and talk about my position. Instead, she suspended me for three days pending an investigation. And she took my keys. She told me that I failed to report that I was taking time off work.

Three days later, Friday 20th, I collected my last pay check. My boss already had the man who sexually harassed me sitting at my desk. Apparently, he got promoted to my job three days after I was hurt. I was not paid for the time off and I have a copy of my medical record from the hospital. My boss won't discuss this issue. I believe that Goodwill owes me back wages since July 10th.

I hope the other apprentices don't go through what I just experienced. It isn't right and neither should my boss or this man get away with it.