IT engineer Richard Johnson believes he was terminated because of his age and where he lives, that's a violation of the California Labor Law. Even though Johnson isn't even close to his expiry date, "IT workers have a shelf life: I have Windows 98 in an XP world," says 48-year-old Johnson. 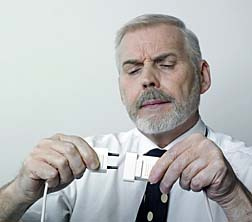 "Basically they screwed me over at this company," says Johnson (not his real name pending a lawsuit). "It has been like working in the twilight zone for the last few months. I've worked in IT for 17 years, for many of the big companies such as HP, and never had this experience. And I also want to add that every company I ever worked for—I left on good terms.

"Eddie, my boss, interviewed me for this engineering job and he thought I was a great fit for the company. I accepted the job and I started January 7th, 2008. The very first day on the job, I met with Eddie and all the other engineers. Eddie told us that he just gave his two weeks notice to the company."

So what did that mean for Johnson? Wait, it gets interesting...

First Day: "He told me that I would take over his clients and I would shadow him for the next two weeks. But Eddie was disgruntled with the company so he went ski-ing instead of training me. I maybe got a total of four days training. The two weeks are up and I start going to the clients.

Third week: "Eddie showed up at a client's office. Turns out, he stole the clients from the company that he just quit. But he also told all these clients that I didn't know what I was doing and that I was dangerous. In other words, I was set up to take the fall.

One of the clients called the office and talked to the sales guy. Another client emailed sales and said he didn't want my services and Eddie would be 'quarter-backing' for me from now on. I'm an engineer; I don't play ball. What does that mean?

Fourth week: "They hired a new guy to take Eddie's place. Previously, the guys taking care of management duties gave me a new client. But the new boss showed up at the client's office (where I was working) and told me that Dave, my co-worker, was getting this client.

At this point I have no clients - I should have had five, at least. The new boss told me not to worry because there would be all kinds of work.

Fifth and Sixth week: "I wasn't getting any work. I was on salary, sitting at home. It was very weird. I got an email from the new boss. The subject line was, 'Let's chat'. That was Tuesday, March 4th. I was terminated on Friday, March 7th.

'Today is your last day on the tech team,' he said to me in his office. He told me that he was getting complaints from customers.
'What customers?' I asked. No answer.
Finally he told me that 'I wasn't a good fit.'

In my contract, there are so many excuses. I can be fired if my nose is bent the wrong way. I understand that. I believe I was terminated because of my age. The guy they hired to take my place, one week before they fired me, was at least 15 years younger than me. I'm 48. I have a family to support and unemployment-- I call it un-enjoyment-- doesn't pay much.

I never had a chance to make this job work. I would not want anyone to go through something like this, so I hope someone reads my story and I can help them: maybe they can avoid this situation. I hope this employer would think twice before they screw someone else around."

More News
In the state of California, age discrimination is a violation of the state's Labor Law.

The California Fair Employment and Housing Act prohibits an employer from discriminating against any employee because that employee is over forty (40) years old. Because there is rarely "smoking gun" evidence of age discrimination, circumstantial evidence will usually suffice. An inference of discrimination is usually raised by showing that the employee,

• Belongs to a protected class (i.e., is over forty (40))
• Was subjected to an adverse employment action (like termination, demotion, suspension).
• Similarly situated employees others outside the protected class were treated differently and more favorably.

Keep in mind that the statute of limitations may apply—there is usually a one-year time limit to filing.