For Guadalupe Cofer, 10 years of hard work and dedication to her job meant nothing: she was fired because she went home from work early one day—with permission. Wrongful termination is a violation of California's labor law.

For the past 10 years, Guadalupe worked for a major supermarket chain as their seafood manager. She suffered from tendonitis—a common hazard of the job—on and off for some time and on September 2nd, it was really hurting. "My arm hurt so much at my elbow that I couldn't lift a thing so I asked the meat manager, who was my acting boss at the time, if I could go home early," says Guadalupe. He said sure, no problem." 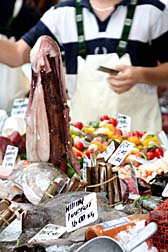 So Guadalupe checked out at 11am on Sunday and came back to work at 7am on Tuesday, her next scheduled work day. "When I clocked in, the store supervisor told me to clock out because I was being suspended for abandoning my job," she says.

"I couldn't believe it! He said that I didn't tell him I was leaving. 'I thought I just needed to report to the acting manager,' I replied. I never thought this would be grounds for termination. 'I truly apologize, I had no idea this was the policy,' I added, but he said that I should have known better. He told me not to come back to work until I receive a phone call and I will be told what to do next. So I waited. On Friday of that week he called me in to his office. At that time he apologized and told me that I was fired.

'You have got to be kidding me,' I said. He handed me my last paycheck and said goodbye --after 10 years. I am still in shock.

Yesterday I met with my union representative and the lady who made the decision to fire me. I asked why I had been fired after working 10 years with this company. She said it was for time and attendance and abandoning my job. 'What do you mean by time and attendance?' I asked. She said I was verbally warned a year ago. 'But that had nothing to do with the issue I am fighting now,' I told her. (Coincidentally, Guadalupe had to take time off work last year because of her tendonitis and she collected Workers Compensation until she could return to her job.)

More News
She just assumed that because I had been there for 10 years, I should know better. I believe they wanted to get rid of me because of the money it cost them when I collected Workers Compensation. Why, with 10 years of hard work and dedication, would they fire me because I went home early one day? I think they don't want to pay any more Workers Compensation because tendonitis is chronic—it comes and goes.

Right now I am looking for another job but I am broken-hearted about this. My co-workers and the man who gave me permission to go home wrote a statement; they are all upset. They have all come forth in my defense—to no avail."

Sounds like Guadalupe is being regarded as a liability; down the road her tendonitis might flare up again and because it is a work-related injury, she would need time off. Wrongful termination is a common violation of [California's labor law]. Perhaps it is time that Guadalupe talks with a lawyer.