California labor lawyer Kim Anglin discusses the creative ways that employers pass on their cost of doing business—to the detriment of their employees.

First, Anglin explains that there are two sets of overtime laws--federal and state laws. Each state can enact their own law and some, like California labor laws, have even higher standards—the public policy is to protect workers. Still, labor law violations are ongoing, and so are the lawsuits, particularly those involving overtime issues.

"Federal law is the fair labor standards act of 1938," says Anglin. "It was part of the new legislation that was meant to protect workers and provide those people working overtime to get compensated and to encourage employers to employ more workers--rather than having a few employees and paying them more." Essentially there were two goals: to reward people who work long hours, and to encourage employers to hire more workers. This legislation was imperative as the US was just coming out of the depression. But times have changed. 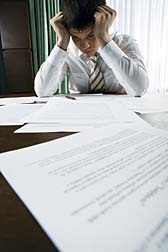 "Employers can avoid paying overtime by the following ways:

1. Misclassify as exempt:
This happens when an employer classifies an employee as a manager or professional and that person is not paid overtime. The idea is that the individual is paid a higher wage, generally as a salary. Supposedly, it was paid to highly-compensate employees but as decades go by, we don't have so many positions in labor with such a stark difference. Often managers are doing the same job as people working for them. All types of employees are being misclassified as exempt, including route salespersons, restaurant and retail managers and stockbrokers, to name a few.

Example: the Starbucks case: managers were also making cappuccinos. Starbucks lost the case and settled for $18 million in 2003.

Example: In the Wal-Mart lawsuit, workers continued working through their lunch and were required to restock shelves after the store closed. Wal-Mart has had 80 wage and hour lawsuits filed against them and $172 million awarded to workers in California and $78.5 in Pennsylvania.

Recently, I got a call from someone working at Wal-Mart--after these cases were settled. She is still being required to work off the clock. It appears that a sophisticated retailer like Wal-Mart is continuing to violate the law with full knowledge of the requirements under the law. Wal-Mart and other retailers are not changing their ways.

Once these lawsuits are settled, they are based on a specific set of allegations within a specific time frame and only for employees covered under that settlement--new violations are not captured within those specific lawsuits. Now new violations appear to be ongoing and there will continue to be more lawsuits.

3. This is the "catch-all" category--anything other than above.


Under California law, I have a case where employees were delivering frozen foods to major chain grocery stores and setting up displays in the stores. The employers were charging them for damaged product that had nothing to do with the employee. They can only charge you with willful damage. The employer was charging the employee with the expense of doing business.

Another case I know about (a colleague of mine represented the plaintiff's) was against Keebler (those little elves that sell cookies). Employees, referred to as 'territory sales persons' were stocking shelves with these cookies--the company would provide someone to stock the stores. However, they were charging back the route person for the wages of the stock helper. In other words, they were charging the route person half the wages of the merchandiser who assisted them with stocking the shelves--both were employed by the company. Keebler settled for $6.2 million.

Also, when employers fail to pay the employee their overtime due, the employee is not making further contributions to social security or to their 401(k) and in the long run that may be shorted benefits that they could have earned over their work career.

Example: If your 401(k) investment is a percentage of your wages, obviously if you are not being paid overtime then you are not able to contribute additional funds to your investment portfolio for the future. You are also being deprived of the growth of those invested funds over the coming years-- which can amount to thousands of dollars over a period of time. Additionally, if you are not getting your rightful overtime and therefore not making the enhanced contribution to your portfolio, you are in turn not receiving any matching contributions promised by your employer. So there can be much more at stake than the original overtime amount due.

Everybody has a finite amount of time to work during their lifetime. If an employee is deprived of thousands of dollars in earned wages, the impact in future years can be enormous. It could make the difference between a comfortable retirement or struggling in your old age because they are missing both social security contributions and possibly other investment income streams that would have increased over the years. Also, loss of pay can mean that you would have to work a year or two longer before you can retire. You have to keep in mind the fact that a dollar properly invested today, can reap many more dollars in 20 years from now. There can be exponential growth that is lost.

In addition, employees are robbed of their time --time which they could have spent with family and friends. As the old saying goes, in the end you always wish you had more time with your loved ones. You never wish you had spent more time at work. This is especially true if your employer has been taking advantage of you and not paying you correctly.

Future of Overtime Lawsuits
They are going to continue and there is still about $1 billion worth of overtime suits whereby employers are still violating the law. Over the last few years, $1 billion has been paid out annually in wage and hour claims nationally.

Therefore, based on the fact that we are still seeing continuing violations--and in fact a few repeat offenders--there is a likelihood that this is going to continue into the future at the same pace, at least for the next ten years.

More News
Ms. Anglin represents employees in wage and hour cases. Her law firm, the Anglin Law Group, provides counsel to employees who have been denied their rightful earnings, including overtime pay, waiting time penalties, reimbursements for necessary expenses paid on behalf of an employer as well providing counsel to employees who have been denied meal and rest breaks. Ms. Anglin received her Juris Doctorate from the American University, Washington College of Law in Washington, D.C. in 1999 and also studied law at Oxford University in England and the University of Paris, Pantheon-Sorbonne in France. She attained her undergraduate degree from the University of California, Davis in 1995. Ms. Anglin has received numerous academic awards including the Vivian Bryan Nelson Scholarship from the University of California, Davis.