Bag Search Plaintiffs Get Another Bite at Apple

On August 17, 2017, the Ninth Circuit breathed new life into Frlekin v. Apple, a class action suit brought by Apple employees :Frlekin v. Apple who contend that, under the provisions of California labor law they should be paid for the time they have to spend waiting to have their bags searched at the end of a shift. The question now goes to the California Supreme Court. 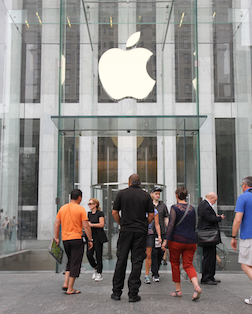 Since 2009, employees of Apple’s California retail stores have been required to have bags and packages searched for pilferage when they leave work but after they clock out. The problem is that they receive no compensation for the time spent finding a manager to perform the search and then waiting while the search is performed. Employees who fail to comply with this policy may be disciplined or fired.

California Industrial Welfare Commission Wage Order No. 7, as codified, provides that, “Every employer shall pay to each employee . . . not less than the applicable minimum wage for all hours worked in the payroll period.” It further defines “‘Hours worked’ as the time during which an employee is subject to the control of an employer, regardless of whether the employee is actually working.

The sticking point is idea of “control.” The Apple employees contend that since they could be fired if they do not wait to be searched they are under “the control of an employer.” Apple contends that employees can avoid the search by not bringing bags to work and, therefore, need not be paid for what amounts to “voluntary” wait time.

More CALIFORNIA LABOR LAW News
On November 7, 2015, the federal District Court for the Northern District of California tossed out the plaintiffs’ suit. It ruled that time spent by class members waiting for and undergoing exit searches was not compensable “hours worked” under California law.The employees appealed to the Ninth Circuit, which tossed the question again, but this time back to the California state court. It’s Tinker to Evans to Chance, or the legal equivalent.

So, for the moment, Frlekin v. Apple lives on. This may be the last stop, however, as the plaintiffs have agreed to be bound by the California Supreme Court’s decision.

Is there still reason for hope? All parties have now recognized that the California courts should have the last word on the meaning of California labor law, and the California Labor Code is more protective of employee rights than federal and other state laws. That could be a good sign for the Apple plaintiffs.